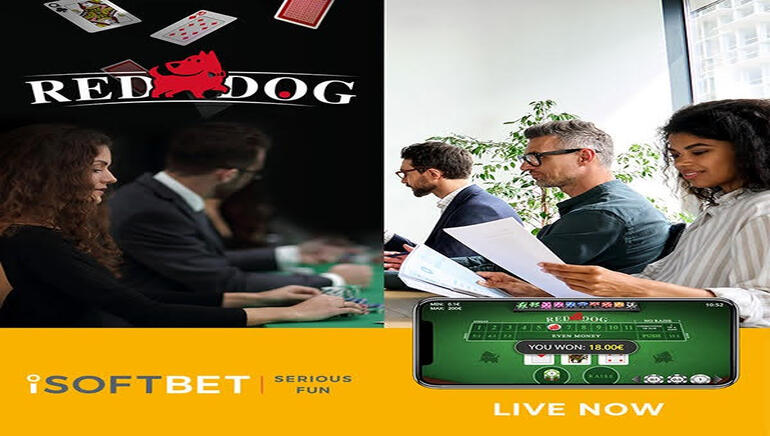 iSoftBet has a massive portfolio of slots, but the software developer is also specialized in producing table games. Fans of the genre have a new reason to be excited, as a brand-new game was released in mid-January. Red Dog is the name of the new release and it is a classic fast-paced table game that can be enjoyed on mobile devices. The simple rules and the engaging gameplay make it easy to recommend to beginners, while also ranking high in the preferences of veteran punters.

How do you Play iSoftBet’s Red Dog?

Red Dog is a game defined by simplicity and it has a silky smooth learning curve. Players begin by placing a bet before they draw two cards that are placed on the table. Between them, an empty space remains and this is where a third card is being added shortly after. In order to be successful with your bet, you need to have the third card lying between the first two. There is a clear link between the potential payouts and the value of the cards, as the smallest gaps between the first two cards pay the best.

On the off-chance that you get two consecutive cards or a pair, the best-case scenario is to push because you can’t play a third winning card. Assuming the third card is of the same value as the initial pair, lucky players will be paid 11 times the bet, as a bonus payout. This is pretty much all that players need to know about iSoftBet’s latest table game which goes by the name of Red Dog. You can try it for free or real money at partner casinos when you want to take a break from its many popular slots.

The software developer is famous for its high-paying slots and has a huge portfolio dedicated to the genre. Players who enjoy spinning the reels of slots find pleasure in popular games such as Moriarty Megaways and Gold Digger. These slots have unique game mechanics that help them stand out from the crowd and provide much-needed variety. iSoftBet’s decision to expand its portfolio with more table games comes at the best possible time for fans of the genre.

At the time of writing, their collection of games exceeds 150 proprietary slots and there are also many table games for players to try. Add to this the thousands of third-party titles supplied to players through the Game Aggregation Platform and players have good reasons to be enthusiastic. Red Dog is now available at casinos operating in one of the 20 regulated markets where iSoftBet is present.