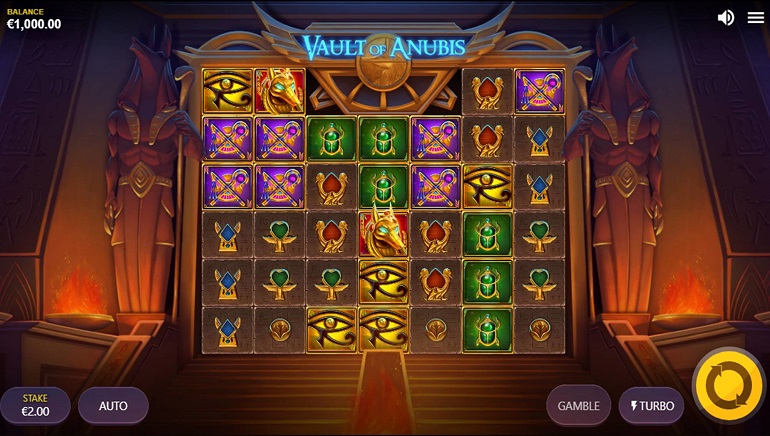 In Red Tiger Gaming's new slot, players can enjoy base-game features like enlarged symbols and random wilds, though the main action of the game is the Vault Spins feature, which awards players 10 free spins with the possibility for more.

Ancient Egypt isn’t exactly a new theme when it comes to online slots, but Red Tiger Gaming has managed to do an excellent job with their new game, Vault of Anubis. The background has an impressive feel, with a 7x6 grid placed against a backdrop of a sacred temple, with two large statues of Anubis framing them. Players can enjoy base-game features like enlarged symbols and random wilds, though the main action of the game is the Vault Spins feature, which awards players 10 free spins with the possibility for more.

Vault of Anubis is a 7x6 slot that’s playable on all devices. The game uses the cluster pay mechanic and winning combos are scored when 5 or more of the same symbol land in a cluster.

Bets range between .20 and 10 and the RTP is a little under the average at 95.74 percent. The game is also high volatility, which is perhaps why Red Tiger decided to include a Gamble feature (see below).

Symbols include Egyptian-style card suits, a crook & staff, Eye of Horus, and Anubis, which of course, is the highest-paying symbol and rewards 750x the stake when a cluster of 30 or more is formed. The higher-paying symbols can also land in 2x2 and 3x3 versions of themselves, creating more winning opportunities.

During the base game, the statues of Anubis can randomly come to life and add multiple wilds to the reels, increasing players’ chances of scoring winning clusters.

Any time a Vault Spin symbol lands, it’s collected in the Free Spins meter at the top of the reels. If all 4 spaces get filled in a single set of cascades, the Vault Spins feature is triggered. This round awards 10 free spins immediately, and if another cascade fills the meter, the multiplier increases by 1x.  Players also have the chance to win an additional 8 free spins.

Red Tiger Gaming has included a Gamble feature in this game, which allows players to gamble their wins from a series of cascades via a bonus of spinning the wheel. The wheel includes different sections of red and green, and only the green sections award wins.

Players who enjoy Egyptian-themed slots will likely enjoy the nuances of Red Tiger Gaming’s new release. The graphics are well-done, the soundtrack is perfectly suited, and the cluster mechanic is a fun change for those who are used to playing more traditional slots. The max win is 5000x the stake, which is a bit low for a high-volatility slot. Still, the extra features in the base game are meant to help players increase the frequency of their wins until they can reach the main action, the Vault Spins feature.