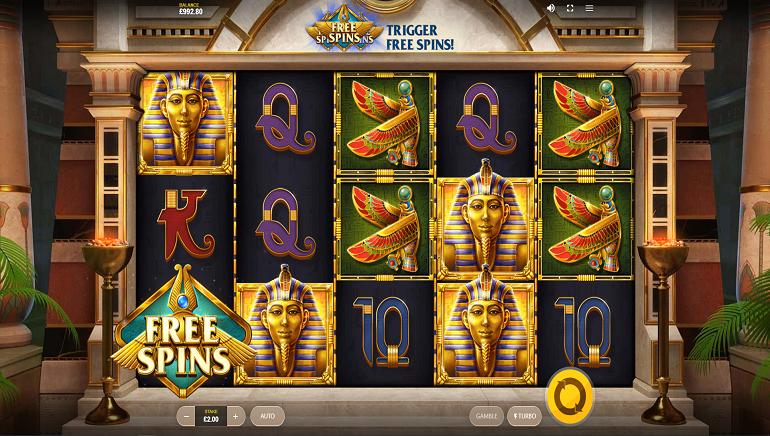 The Wings of Ra by Red Tiger gaming is an ancient-Egyptian themed slot of epic proportions. Filled with mysticism, treasures, and adventures, this slot game is a fitting tribute to the Sun God, Ra!

Wings of Ra is an artfully-crafted slot game filled with golden treasures galore. This 5 x 3 reel slot features golden busts of the majestic King Tutankhamen. The game is peppered with icons of ancient Egypt such as the Ankh, Golden Scarab Beetles, Anubis, Queen Nefertiti, the Eye of Horus, and more. The low-paying symbols in the game include 10, Jack, Queen, King, and Ace. All the symbols are fashioned off ancient Egypt's timeless appeal. Perhaps the most valued symbol in the game is the ‘Mystery Coins’ symbol, represented by the golden amulet with a red ruby in its center. This symbol fills the progress bar during ‘Bonus Spins’ rounds, helping players to form winning combinations.

Wings of Ra slot certainly cuts a fine form in the gaming arena, thanks to its highly engaging game play, and bonus spin features which gain momentum as players progress through their adventures. This interactive video slot follows hot on the heels of other Red Tiger gaming titles such as Pirates’ Plenty: The Sunken Treasure, as well as Dragon's Fire Megaways™. This is the first video slot game in Red Tiger’s history which uses the Pix.js framework. This is designed to enhance game play, prevent interruptions, and create a fully interactive experience. Released just in time for the Cheltenham Festival in the UK, the slot machine game follows hot on the heels of Pirates’ Plenty - a rollicking adventure for players.

The boosted features and functionality of Wings of Ra slot game makes it one of the most enticing prospects in recent times. The Mystery Coins of golden amulets and red rubies appear in a random fashion, rewarding players with big wins in the process. There are 10 fixed paylines in the game at all times, ensuring that all lines are activated in this mysterious adventure. The Free Spins symbol is represented by the Golden Scarab. This mystical element features a topaz gemstone at its apex. When the beetle's wings start fluttering, players start winning. Free Spins are triggered when 3+ golden scarab beetle symbols appear on the reels. These can also transform symbols into Mystery Coins for even bigger prizes.