Reels of Rio is the Latest Great Slot Released by Spinomenal 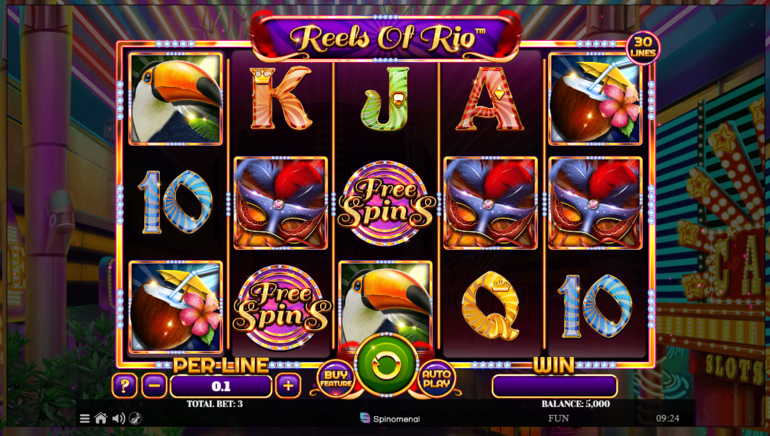 Spinomenal pays tribute to one of the best cities in the world and its amazing carnival, in the recently released video slot Reels of Rio.

Spinomenal wants this spring to be magical and that’s why it has announced the release of a brand-new slot. Reels of Rio is the latest addition to an already impressive portfolio that consists of more than 200 games developed in HTML 5. The software developer has ramped up the production of games, with 4-6 new releases every month. Add to this the selection of games delivered by third-party providers through the Spinomenal Aggregation Platform and punters have good reasons to be enthusiastic.

Feel the Excitement of the Rio Carnival

Spinomenal has scratch cards, table games, and other popular genres, but they are specialized in the development of slots. This is self-evident for anyone who stumbles upon the beautiful Reels of Rio. This is a mobile-friendly game that looks and feels natural for fans of the genre, as well as those who play it for the first time. Punters can enjoy it for free in the demo version, or they can jump straight into real money gambling and make the most of each winning spin.

Spinomenal’s Reels of Rio takes players on a virtual trip to South America, to experience the amazing atmosphere of the carnival. Developers were inspired to cover the reels with symbols that brilliantly capture the very essence of the celebration. Revellers, samba schools, and floats, as well as masks, cocktails, drums, and toucans, are some of the symbols populating the reels. Not surprisingly, a beautiful samba soundtrack plays in the background, to quickly get players fully immersed into the atmosphere.

Win up to 1000 Times the Stakes with Reels of Rio

There is more than meets the eye about this beautiful-looking game with a fascinating soundtrack. If you play Reels of Rio, you will have the chance of winning up to 1000 times the investment. To accomplish this, you need to line up five wild symbols in the right sequence on the winning pay line. Keep an eye for the glamorous Samba performer, because this is the highest paying symbol. It also has the ability to substitute all the other icons across the reels, so it is a very pleasant sight.

Free spins are immensely popular among slots enthusiasts and Reels of Rio doesn’t let anyone down. You can trigger this special feature and choose 20 free spins with two stacked medium symbols or 10 free spins with three stacked medium symbols. In any case, you are likely to win significantly more and there is also a chance to find three more free spins symbols. If this happens you will unlock five extra spins and many more can be triggered, so the sky is the limit for lucky punters.