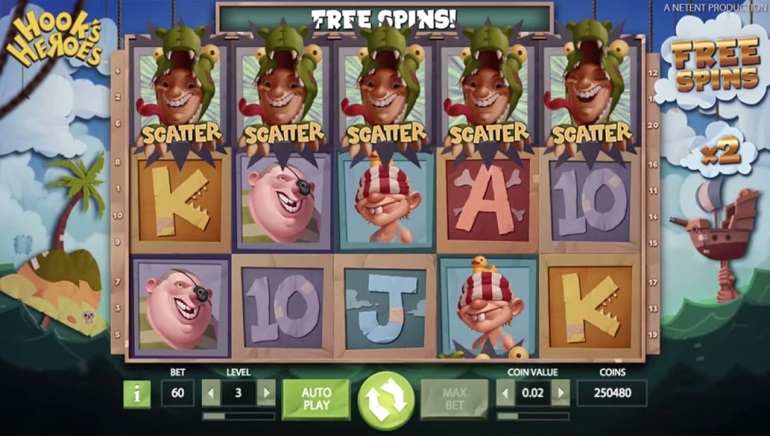 Hook's Heroes is the latest feature filled slots game from Net Ent, and is due for release at sites like Guts Casino, and Mr. Green on 23rd September.

Net Ent are releasing their newest slot game on 23rd September at a number of online casinos including Mr. Green Casino, Guts Casino and Casino Cruise. Hook's Heroes is a pirate themed slot that is decked out with lots of bonus rounds and side games including three free spins games that can lead to a pile of treasures.

Hook's Heroes is presented in the friendly cartoon style that has become something of a speciality for Net Ent. Symbols mostly consist of various pirate characters who land across the five reels and twenty paylines to bring in prizes, plus there are the high card 10 through to A symbols as well as Wilds and Scatters.

When three or more Scatter symbols land on the reels at once, players get to pick a free spins Feature Game of their choice. The Pirate Feature will pay out whenever three of the same symbol appear after a spin, without having to be on a payline, while the Mermaid Feature doubles the value of wins throughout the round, and quadruples the amount of any win made by a Wild substitution. The third option is to take the Fairy Feature spins, where random symbols will be turned into additional Wilds, but whichever Feature is chosen, nice animations accompany them, such as a fairy fluttering across the screen.

At any point in the base game, a Feature Spin can be triggered, where players get to preview what can happen in each bonus round, but for a single spin only, which is a useful way of deciding which Feature they will go for.

Hook's Heroes is a welcome addition to a range that continues to impress at the many online casinos that have opted to use the Net Ent collection. Seek out the treasures of Hook's Heroes at Mr Green Casino, Guts Casio and Casino Cruise within the next couple of weeks.

Back to the '90s: Play'n GO Hugo Slot Releases Today