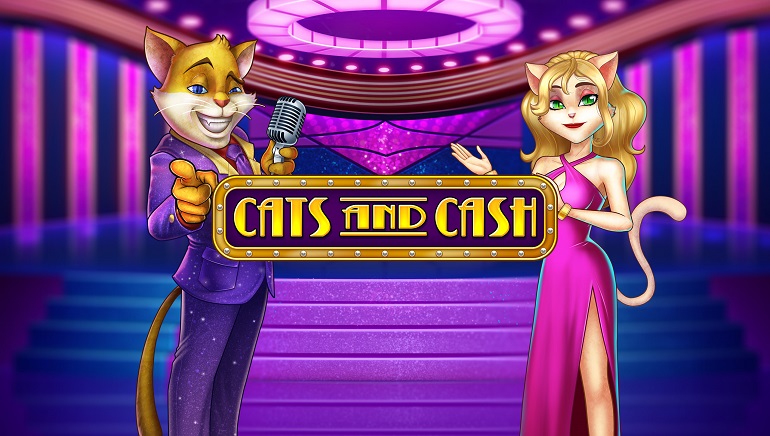 Play’n GO’s classic game-show-themed slot game, Cats and Cash, originally released in 2012, has been given a makeover and is being released today in HTML5.

Play’n GO’s classic game-show-themed slot game, Cats and Cash, originally released in 2012, has been given a makeover and is being released today in HTML5. If you haven’t played Cats and Cash before, now is a purrrfect time to give it a try on your smartphone, tablet, or PC.

Play’n GO’s Cats and Cash is a 5 reel video slot in which you can activate up to 15 lines (in numerical order) and can bet up to 5 coins per line. The RTP is 96.07% and the volatility level is medium. Reel symbols include the feline game show assistant, contestants, blocks of gold, diamond necklaces, and wads of cash.

The show host is the wild symbol while the goldfish acts as the scatter. There are 2 bonus symbols as well: The bonus wheel and the gift box. Two or more scatters landing on the reels will give you a win, and a winning combo that includes a wild will pay double.

When three or more bonus wheel symbols line up from left to right on an active line, the Wheel of Fortune Bonus Round is triggered. In this round, you can spin the Wheel of Fortune and win a random prize. When the wheel lands on an orange section with a star, you’ll get a prize plus a respin.

Another special feature to look out for in this game is the Pick-a-Gift feature, triggered when any three boxes land on an active line. In this feature, you can choose a prize from 10 boxes. While all the prizes from the boxes can be revealed, you only get to keep the one from the box you chose.

Play’n GO’s revamped Cats and Cash slot is a fun, lighthearted trip that can not only satisfy your craving for cute kitties but also has the potential to reward some fairly big wins. Check out the HTML5 version of Cats and Cash at Play’n GO-powered casinos and see for yourself!