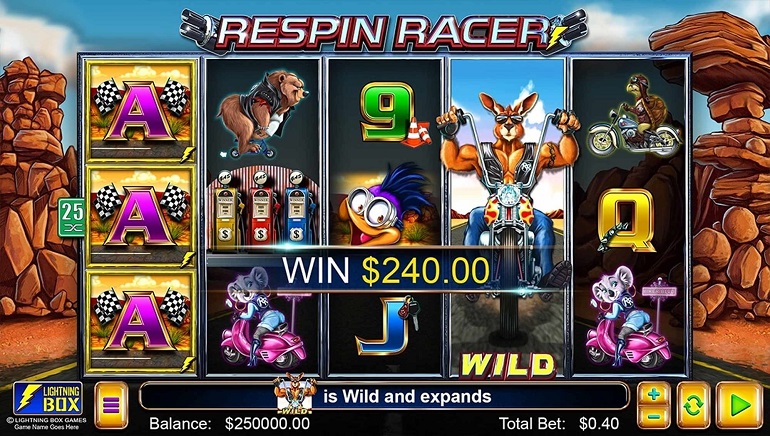 Wile E. Coyote and the Road Runner are well-known from the Looney Tunes cartoons. Lightning Box Games, for one, has been inspired by the series, having developed its brand new Respin Racer with a main character that looks remarkably familiar to the Road Runner.

Lighting Box has revealed that the Respin Racer is set amid the rocky deserts of Arizona. The Road Runner and other animals cruise along a desolate highway on turbo-charged vehicles in a race for glory that looks like a cartoon version of the Mad Max movies.

The arrangement of the slot is familiar, given the layout of five reels and three rows to provide 15 symbols in all. In turn, the layout has enabled Lightning Box to arrange 25 paylines in a number of unique combinations along the five reels.

Lightning Box has programed the wagering system to use only one coin for each of the 25 paylines. As for the coins, each one can be given a value from the options ranging from €0.01 to €1.00. Therefore, the lowest bet allowed on Respin Racer can be €0.25, while the largest can reach €25.00.

One of the central bonus elements is the Respin Bonus feature that can be trigged if six places on the first and fifth reels hold a golden symbol at the same time. After achieving that outcome, the golden symbols are exchanged for stacked Road Runners. At this point, a wild kangaroo can possibly land to deliver payouts of 9x times the line win.