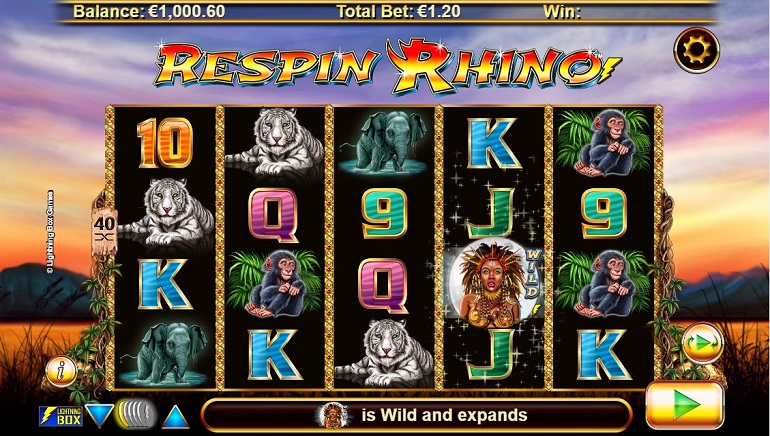 The latest slot from Lightning Box is the African wildlife themed Respin Rhino, which awards high-value free games and an expanding wild symbol.

Australian games developer Lightning Box is releasing their latest slot game into the wild, with Respin Rhino charging into selected online and mobile casinos, with general release on 4th April.

There's 5 reels of African themed symbols, with players looking to land a chimp, tiger, bird, or elephant across any of the 40 paylines for a high-value win, while playing card icons 9 to A will complete the lower-paying combinations.

A backdrop image of the African plains sets the scene and compliments the symbols on the reels, which also include a local woman who acts as a wild symbol, substituting for all others if she can then complete a line. This symbol will also expand across a reel, making her task even easier.

The star of the show however, is the rhino, and this symbol pays the top prizes when it lands across a line. If special golden symbols land on reels 1 and 5 in a single spin, they will transform into more rhinos, which will remain locked in place as the rest of the reels spin 3 times for free.

If the wild symbol appears in any of these bonus games, the respins will start again and it's possible to be awarded up to 9 extra spins in total.

Where To Find Respin Rhino

Respin Rhino will be available at online casinos powered by Lightning Box.

Commenting on their latest release, Lightning Box MD and co-founder, Peter Causley said: “Respin Rhino is the latest addition to our ever-growing portfolio and we are confident it will prove to be as successful as its predecessors. The game’s soundtrack and visuals will give our players a real sense of being on safari and we’re sure they will be pleased to poach as many winning lines as possible.”