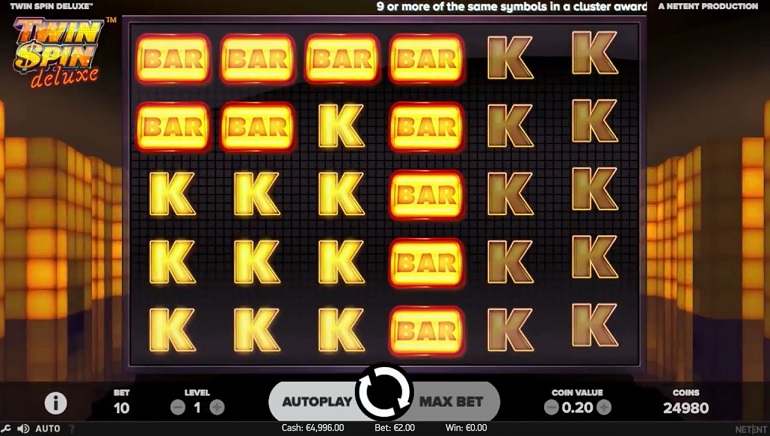 Discover the key features of Twin Spin Deluxe, a sequel to the 2013 original slot game that is playable at NetEnt casinos.

Twin Spin Deluxe is a sequel to the original NetEnt slot that was released in 2013. The new version emerged just before the end of 2017 to give gamers a supped up version with additional special features to win from.

In this game, players will notice that the slot interface has been crafted with an extra reel and two extra rows. As a result, Twin Spin Deluxe has six reels by five rows, whereas the original Twin Spin has five by three. The 15 additional symbols shall provide even more opportunities for players to win on Twin Spin Deluxe.

In Twin Spin Deluxe, the wagering system is one that is based on levels and coin values. The levels range from one to 10, while the coin values go from €0.01 to €1.00. NetEnt has made €0.10 the lowest possible wager, whereas the highest can be €100.00 on the Twin Spin Deluxe slot.

Twin Spin Deluxe is one of the latest NetEnt slots to be made with the Cluster Pays feature. Quite simply, this is a function where players have to create clusters of nine or more connected symbols in order to win.

For reference, all of the symbols must be linked and players will only receive winnings from the highest-value outcome. As an example, the maximum 10,000x jackpot can only be earned through getting 30 or more blue diamonds in a cluster.

Up next is the Twin Reel feature, which starts by synching up two adjacent reels at the beginning of a turn. These are perfectly matched and can randomly expand to cover up to all six reels of the slot game.