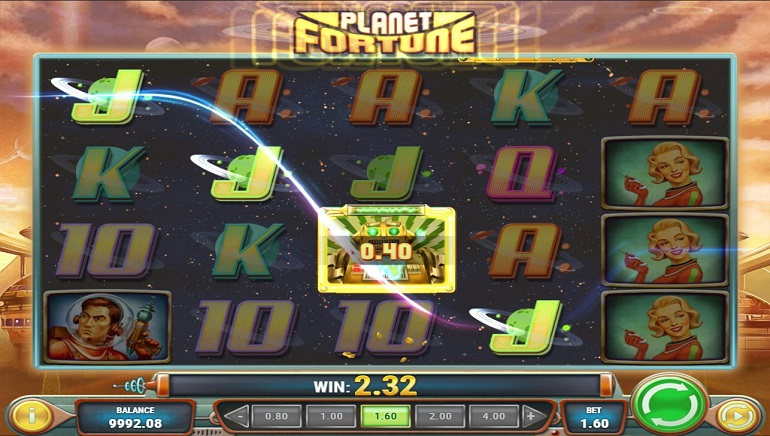 Play’n GO has given us a sneak peek into its upcoming new slot game, Planet Fortune, set for release on January . We took the opportunity to play a few rounds, which featured excellent graphics and sound effects. However, we had a hard time striking some of the looked-for special features.

Planet Fortune is a 5-reel, 40-payline video slot with a retro design and a futuristic theme — how’s that for paradoxical? Still, the combination works, with a background that features outer space, stars, and planets, and a robotic soundtrack that perfectly suits the game’s theme.

There are two characters from the future gracing the reels: Astro-Adam and Extragalactic-Eve. These symbols are stacked on the reels in stacks of 2-4. There is also Will the Wild Robot, who is actually the Wild. This symbol can substitute for any regular symbol in order to create more winning combinations. Regular symbols include space gems, letters, and numbers.

When 3-5 matching symbols line up in any way, you score a win. A Magnetic Mayhem spin can be randomly triggered on any spin; when this happens, two or three reels stick together, displaying 2x2 or 2x3 mega-sized symbols, which spin in sync and help you garner more wins.

The Robot Revolution feature is triggered when 3-4 robot wild symbols appear anywhere on the reels — but those wilds do not land easily. We played about 100 spins without striking the Robot Revolution (while Magnetic Mayhem occurred three times.).

In theory, once the Robot Revolution is triggered, you are granted 10 free spins, during which the wild robots remain “sticky” in place until their batteries need recharging. Once the free spin starts, all wilds will “walk” one reel to the left.

Planet Fortune, has an interesting theme and sterling graphics, as you would expect from a company of Play'n GO's caliber - we believe this one will be well received by players!