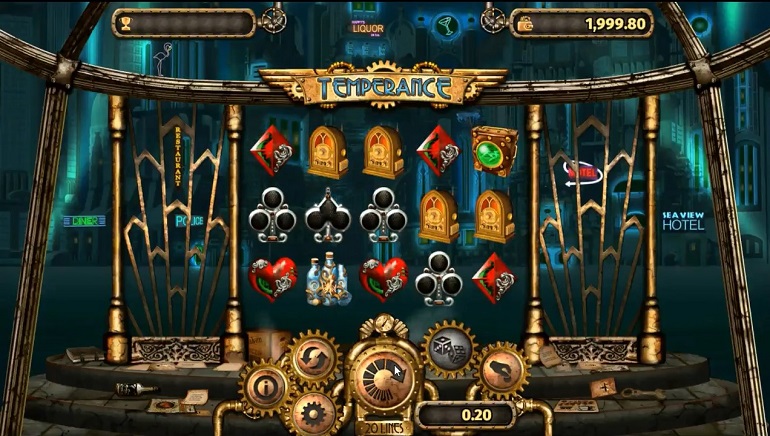 Microgaming and Old Skool have not only created a unique-looking slot game, but also one that includes 2 worthwhile special features. And it's heavily influenced by the popular Bioshock video game.

Microgaming and Old Skool Studios have teamed up to create Temperance, a retro/futuristic-themed slot whose main attraction is a Free Spins feature that offers up to 40 free spins and a random multiplier. If that wasn't enough, there's also a Survival Bonus that awards cash prizes. Temperance can be played on all devices at Microgaming-powered online casinos.

Temperance is a 5-reel, 20-payline slot that’s set in a futuristic underwater hotel. The graphics are interesting and the soundtrack includes out-of-place yet oddly-calming French music. This is in line with the heavy influence from Bioshock, the cult classic video game released in 2007 by 2K Games.

Symbols include everything you would need for living underwater: A diver’s helmet, bottles, radio, and sonar (plus a few card suits). When 5 sonar symbols land on the reels, you win 25x your stake. Then there’s a symbol with a guy, which is the wild, and there are 2 scatter symbols: A girl and diver. The girl triggers the Free Spins feature and the diver triggers the Survival Bonus.

The Survival Bonus feature is triggered when the diver scatter symbol lands on reels 1, 3, and 5. During this feature, you enter a chamber and can pick from an array of objects. Behind these objects are cash prizes, a win-all, and an Advance. If you advance to the next level, you’ll get to choose from bigger prizes. There are 5 levels of the Survival Bonus round.

The Free Spins feature is triggered when the 3 or more girl scatter symbols land on the reels. Depending on how many scatters land, you’ll win 8, 12, or 20 free spins. Before the round even starts, you spin a multiplier, which determines how much your wins will be multiplied during this round. Multipliers can be either 2x, 3x, 5x, or 10x. When you get the 10x multiplier, you can win up to 4900x your stake!

The Free Spins round also includes stacked wilds and can be retriggered when 3 or more scatters land on the reels.

Finally, something different and exciting! Microgaming and Old Skool have delivered not only a unique-looking slot game, but also one that includes 2 special features. As a medium to high variance slot, don't expect wins on every spin, but when you do score a win, it will most likely be worth your while.