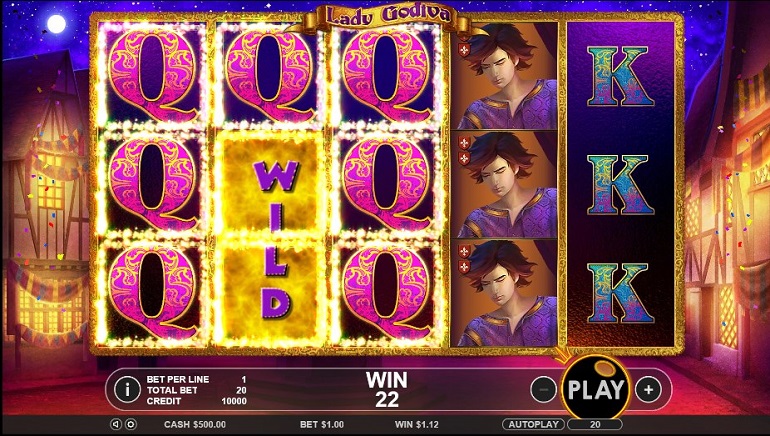 OCR readers can enter another exclusive slot tournament at Rich Casino. Lady Godiva will run throughout March and is the follow-up to the Spin Love tournament.

After February’s Spin Love event, Rich Casino will host another exclusive tournament for OCR readers. From now until 31 March, OCR readers can join a slot tournament with a $500 prize fund, with $300 earmarked for the winner.

New or existing players can join the tournament by submitting the code LADYRICH on their next deposit. Not only will this ensure entry to the tournament, but the code can also unlock an extra $60 for gaming.

All players competing in the tournament will need to focus on Rich Casino’s Lady Godiva slot, which is developed by WMS Gaming. And the developer went all the way back to the 13th century to find the inspiration to create this slot based on a legendary Englishwoman called Lady Godiva. As a slot game, she can award 10 spins with three scatter symbols.

Competing players will seek to repeat the success of Jacklyn, who was the OCR reader who claimed the $300 top prize. And there were two other lucky OCR winners going by the usernames rodkay and Lavonviolet, who won $200 and $100, respectively.

Lady Godiva is just the first of Rich Casino’s March events, which also include the Easter Raffle. Starting 15 March, players who make a $50 deposit by 31 March will receive a raffle ticket to enter a draw for a $500 gift voucher.

The second March tourney has been created to celebrate St Patrick’s Day from 7-20 March. Rich Casino players can wager on the site’s Forest Treasure slot to compete on a leaderboard for a share of the $31,700 prize fund. Players can generate one tournament point for each $10 wagered, with the top 10 finishers claiming a share of the funds.

March Madness is the third and final tournament for March, and has been designed with basketball fans in mind. Players can stake a claim on the $31,700 prize fund by wagering on Rich Casino’s Slots Dunk game. For this tournament, players can enter during 14-31 March. One $1 wagered will equal one tournament point on the leaderboard.