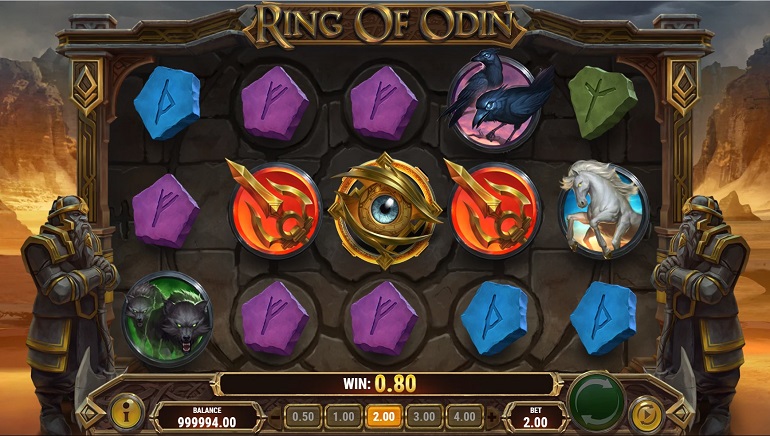 Play’n GO’s new slot, Ring of Odin, gets on board the Norse mythology train and takes players into the dark world of Odin and his powerful ring, Draupner. While the theme of Norse mythology isn’t new, Play’n GO really outdid itself on all fronts: Graphics, soundtrack, features, and win potential. The graphics are spectacular and the soundtrack could easily be that of a blockbuster film. As for the features, Ring of Odin is chock-full of them. Randomly-activated respins, Mega Symbols, multipliers, and free spins combine to make this slot full of action and suspense. And finally, a max win of 5000x the stake means that players who bet the max are looking at a potential $500,000 takeaway.

Lower-paying symbols include various rune stones with Norse symbols while higher-paying symbols are taken straight from Norse folklore. These include Odin’s magical spear, his eight-legged horse, 2 messenger ravens, and 2 wolf guards. There is also an Odin wild and an all-seeing eye scatter.

The Odin’s Ring feature can be randomly activated on any base game spin. As the reels are spinning, the ring can randomly appear in the center. When the reels stop, the symbol that lands on the ring becomes “chosen” and players get 1 respin. During the respin, the ring multiplies into 9 rings to cover the entire 3 middle reels. After the reels have stopped and wins have been awarded, a respin will be given for the chosen symbols that landed inside the rings on the middle reel. If no chosen symbols land on the rings, the round is over.

After chosen symbols land on the rings during the Odin’s Ring feature, 1 respin for every instance of the symbol will be awarded (for a maximum of 9 respins). This is called the Draupnir Respins round, during which the chosen symbol gets duplicated into a Mega Symbol that is made up of 9 identical 1x1 symbols. They remain stuck on the 3 middle reels until all the respins have been taken.

During the Odin’s Ring feature, if the scatter becomes the chosen symbol and then lands in the 9 rings, the Foresight Free Spins feature is triggered. The number of scatters that land in the 9 Rings determine the multiplier, which can reach up to 9x. This feature can also be triggered during the base game when 3 scatters land on reels 1, 3, and 5 in a single spin.

Once triggered, players are awarded 4 free spins, and Odin’s Ring is activated on each free spin. Every scatter that lands on a free spin awards another free spin.

Ring of Odin hits the trifecta with stunning aesthetics, great features, and a compelling max win of 5000x the stake. Even players who aren’t fans of Norse mythology will have to admit that from start to finish, Play’n GO’s execution is outstanding.