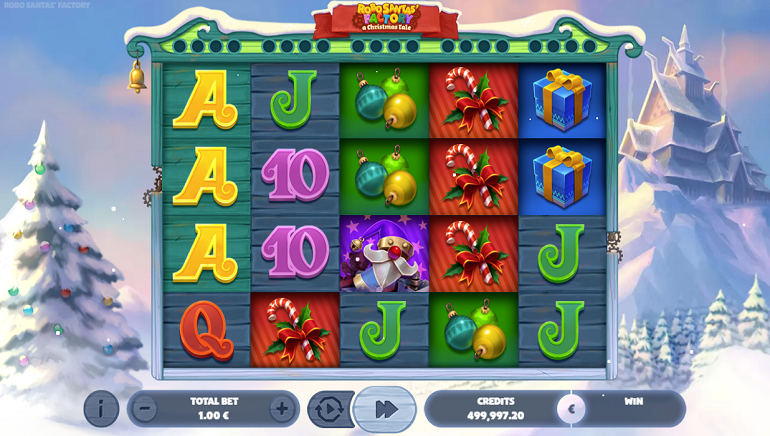 Festive cheer is alive in Robo Santa’s Factory, which is the latest video slot from GAMING1, with the key features including a bonus game.

December 2020 has brought the release of the Robo Santa’s Factory slot from GAMING1, which is the software provider responsible for developing other known releases such as Christmas Dice, Horus Temple, Dice of Mystery, and Mystic Pyramid. Along with Robo Santa’s Factory, these various games are available now at participating casino sites that are powered by GAMING1.

Robo Santa’s Factory has been designed in separate versions for desktop and mobile screens. Furthermore, the festive video slot is accessible in several languages to include English, German, French, Spanish, Italian, Portuguese, and Romanian.

When starting Robo Santa’s Factory, players can assign a total bet of €0.10 up to €25.00 (exact values can depend on the currency). An auto-spin function is also included for applying 10, 20, 50, 100, or infinite spins within the settings.

On the interface, there are five reels and four rows that are used to house the symbols. In total, there are 178 ways of winning if players can successfully create a chain of symbols that match from the left-most reel to the right-most reel.

According to the slot’s paytable, it is possible to win up to 5,000x times the current bet when the Robo Santa’s Factory Bonus Game is activated. There are gold and silver bonus images and three or more of these symbols are needed to activate the bonus game. Players can then use their turns to accumulate a total multiplier that is applied to their current total bet.

Robo Santa’s Factory also wild symbols that do not just act as substitutes but can also be collected. There are four positions above each of the five reels. For each wild symbol that lands on a reel, one of the four vacant positions shall be filled with a golden coin. A reel filled with four coins will then remain stacked with four wilds for three turns.