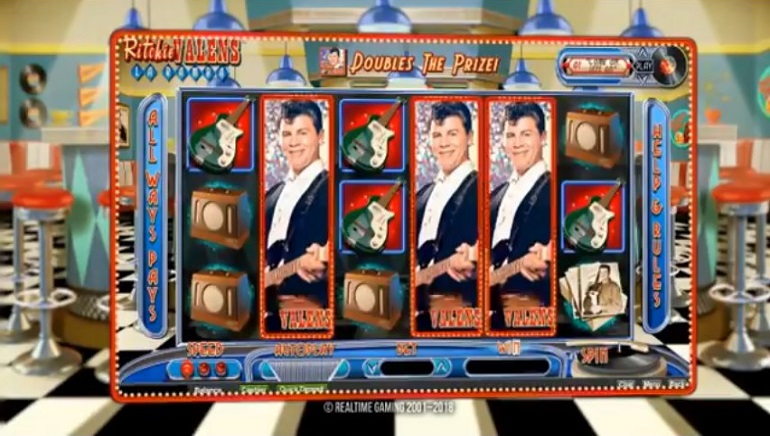 Ritchie Valens La Bamba is a new slot from Realtime Gaming that celebrates the life and biggest hit of one of the original stars of the rock 'n' roll era.

The game pays tribute to Ritchie Valens and his greatest hit which topped the charts in 1958, just a couple of months before he died in a plane crash along with Buddy Holly and The Big Bopper.

The 1950's style extends to the game surround as well as the control buttons, and players click a record player to spin the reels, aiming to land symbols such as an electric guitar, radio, tickets to a Valens concert and an autograph book across adjacent reels in any positions.

There's a total of 729 ways to line them up for a win, although Ritchie Valens is a special wild symbol, who will act as others, while also expanding across any reel he lands on, doubling the value of any combinations that he helps to complete.

Free Spins To Sing About

The La Bamba logo is a scatter symbol that launches 20 free games when it stops in any 4 places. During these games, any wins will be multiplied by up to 3x, but if 5 scatters triggered the round, extra expanding wilds will appear on the middle 4 reels.

Players who land those scatters on reels 1 and 6 only, will be rewarded with expanding wilds on all reels throughout the free spins, but however they are triggered, any 4 or more La Bamba logos will launch another 20 bonus games once the current round has finished. Up to 6000x the stake can be won in these bonus spins. With a soundtrack to match the action on the reels, this slot is sure to be a crowd pleaser at Intertops Casino and others RTG powered casinos.