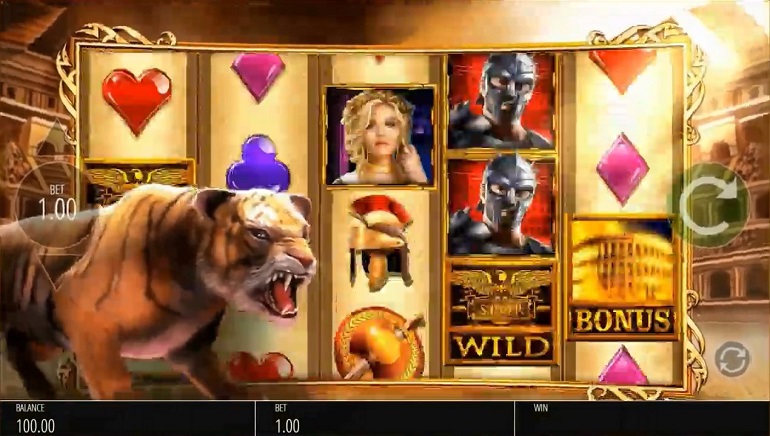 Prepare to enter the greatest arena known to man, the Colosseum. Gladiators will go toe to toe in pursuit of victory and honor. This is your chance to take up the challenge. Rome: Rise of an Empire is masterful entertainment!

Blueprint Gaming has officially entered the legendary arena with its latest slots blockbuster, Rome: Rise of an Empire. This spectacular HD slot game features glorious audio-visuals and stunning gameplay. Rome: Rise of an Empire is a tribute to the majesty of one of the greatest empires mankind has ever known. It features 5 spinning reels, 3 rows and 20 paylines of action-packed entertainment.

The Weapons of War Will Roar

This dynamic game breathes new life into ancient times where the weapons of war were brutal and gladiators bludgeoned one another to the delight of the mob. Rome: Rise of an Empire showcases an array of in-game elements. These include the randomly appearing Tiger which roars to life and activates 1 of 5 modifiers. The sword strike feature is equally captivating, and will have all players on the edge of their seats in the on-screen Colosseum.

When you land 3+ Colosseum Bonus symbols, there are 5 amazing bonus rounds up for grabs. These include: Urn Riches, Uprising, Volcanic Cash, Empress’s Treasure and Big Money Bonus. As you play your way through the greatest entertainment spectacle of all time, you will be able to pad your bankroll with big bonuses and enjoy plenty of excitement. With 5-reel modifiers on any individual spin, it's important to keep your eyes out for the roaring Tigers. These modifiers include Bonus Boosts, Spears of Destiny, Sword Strikes, Legions Glory, and Symbolus Maximus.

Pulse-Pounding Entertainment at Your Fingertips

This thrilling slot machine game features a combination of high-paying symbols and low paying symbols. The Rome symbols are the high paying symbols, as are the Empress figures, and Gladiator symbols. Low-paying symbols include the diamonds, hearts, spades, and clubs. The Rome wild symbol substitutes for all other symbols except for the Golden Scatter symbols to help form winning combinations. This game packs a wallop, and delivers big league for fans of ancient civilizations, ancient Rome, and arena fighting.

The game pays homage to the fearless Gladiators who stepped into the arena of death to please the Emperor and emerge victorious. These bloody contests pitted warrior against warrior in a battle royale for domination. Rome: Rise of an Empire is a valiant effort by Blueprint Gaming to bring masterclass gaming to the scene. As you fight your way through levels and challenges, you will assume the role of a powerful Roman Gladiator in front of a sold-out Colosseum of bloodthirsty spectators. When in Rome…