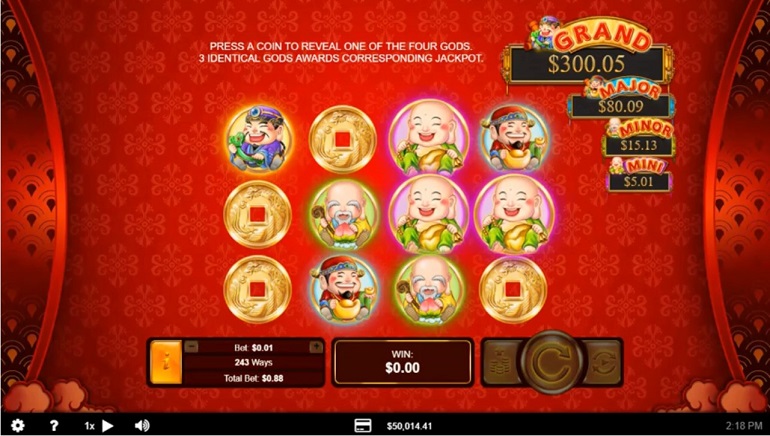 Games developer RTG Asia has launched an online version of Plentiful Treasure, a popular game that was previously confined to land-based sites

Plentiful Treasure is a slot from Realtime Gaming (RTG) Asia that has proved to be a big success at land-based casino sites. It's now been launched in an online and mobile version to give players access to the game from wherever they may be. A traditional style will help this slot machine to become just as popular when it's released online.

Packed with jackpots and with a rewarding free spins round, this Asian-themed game has 5 reels and a 243 Ways to Win layout. Prizes of up to 50,000x the stake can be claimed and players can stake from just 0.10 to 100.00 on a spin of these colourful reels.

Classic symbols such as bowls, jewels and Asian Gods pay out the higher prizes when landing anywhere on adjacent reels from the left side, while playing card icons 9 through to A return the smaller prizes. Two wild symbols will help players to land more winning combinations, with the wild pearl multiplying the value of any win by 5x.

A tripod is the scatter symbol, triggering free spins when it lands in any 3 or more places at once. During the 8 free games, only the higher value symbols will be on the reels, with the playing card symbols removed from the mix. This makes it easier to land prize-winning lines of symbols, each paying out the higher prizes. More scatter symbols will retrigger the bonus games.

Mini, Minor, Major and Grand progressive jackpots can be won. Players need to match 3 golden coins from the 12 on display to scoop a progressive prize.

Plentiful Treasure is a game that certainly lives up to its name. Having been a great success for RTG Asia at casinos, they have now given gamblers at online and mobile sites the chance to sample the treasures of this attractive slot.