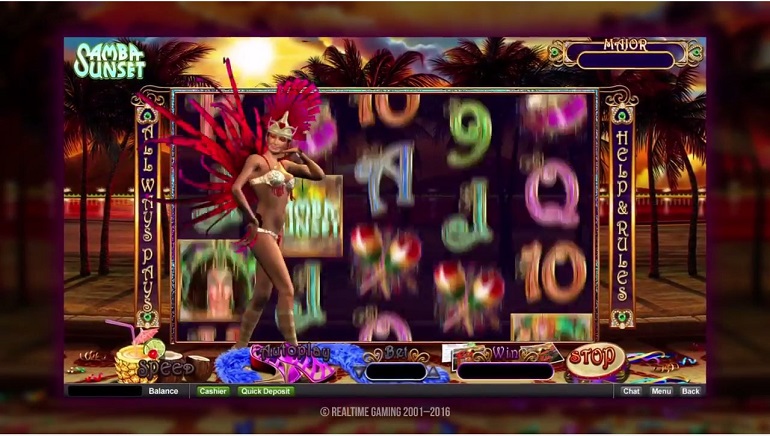 Realtime Gaming has released its latest slot, perfectly timed for the upcoming Rio Olympics in August. Samba Sunset brings the fun of a Brazilian beach party right to players’ homes and phones. With lively graphics and a festive soundtrack, this game will make you want to get up and dance - if you weren't busy enjoying all of its special features.

Samba Sunset has 5 reels and 243 ways to win. High-paying symbols include rattlers, the samba dancer, the bay (the scatter symbol which only appears on reels 2 and 4), and the Samba Sunset logo (the wild symbol, which can substitute for other symbols - including the scatter - to complete winning combinations). Other symbols include traditional playing cards that have an exotic flare.

In the base game, the highest payout is 4,500 credits. When five scatter symbols line up on the reels, players can win a maximum of 900 times their original bet.

Three or more scatters appearing from left to right will activate the Free Games feature, during which players are awarded 10 free games. During this feature, if players score a winning combination using a wild, their wins will be doubled.

Also during the Free Games feature, if three scatter symbols appear on the reels, the Super Games feature will be activated, which adds samba dancers to the reels and awards players with another five free games. In this feature, the wild symbol will triple all wins! The only downside is that this feature cannot be retriggered.

Samba Sunset can be played on PC or mobile at RTG powered casinos such as Slotastic Casino, Grande Vegas Casino, and Intertops Casino.