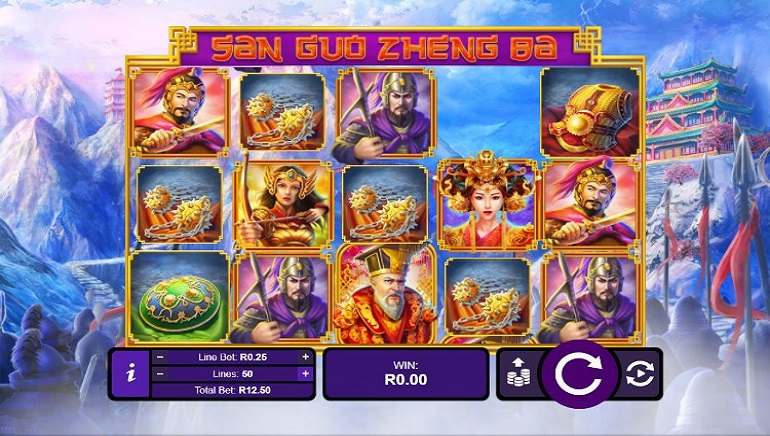 Realtime Gaming is a software developer powering dozens of popular casinos online and it supplies them with hundreds of games. The latest addition to the already impressive lineup is a slot that goes by the name of San Ghu Zheng Ba. Translated as Three Kingdom Wars, this new game is inspired by Chinese history and has an interesting story to tell. The moment players spin its reels for the first time they realize that this is an epic game crafted with great attention to details.

The symbols populating the reels draw inspiration from the ancient times when Chinese generals fought for supremacy. Behind the great visuals and immersing sound effects, hides a game that can produce big winnings of up to 50,000 coins. There is an indissoluble link between the size of the investment and the potential payouts, so there is an incentive to place bigger bets. In any case, those who hit the winning combination will be lavishly rewarded and San Ghu Zheng Ba can also be played straight in the browser.

Realtime Gaming’s portfolio of slots can be enjoyed on smartphones and tablets. San Guo Zheng Ba slot (Three Kingdom Wars) makes no exception and can be played on iOS and Android powered devices. It has a modern 5-reel 50-payline structure with expanding wilds, free spins and multipliers that make it even more exciting.

RTG’s San Guo Zheng Ba slot has an autoplay feature for those who want to push their gaming sessions into overdrive. The Empress is the most coveted symbol as she can produce the best paying combination of up to 50,000 coins. The Golden Dragon represents the wild symbol and helps players produce more winning combinations. It is the Emperor himself who serves the role of scatter to produce free spins.

Look for the slot at RTG-powered online casinos.