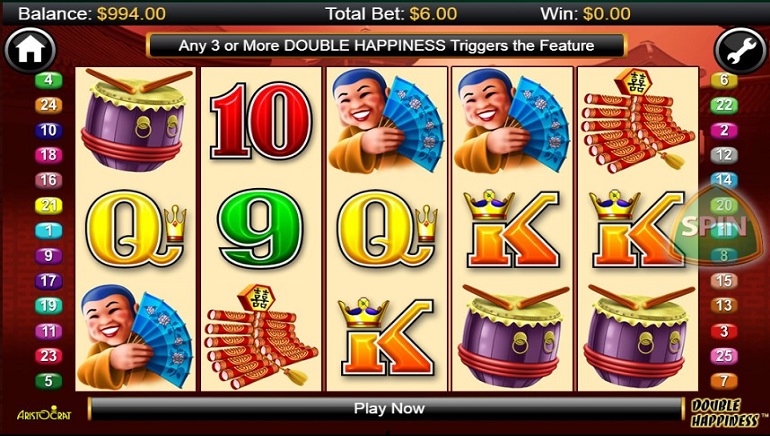 Double Happiness is a new slot from SA Gaming which hit online casinos last month. It follows a classic Chinese theme and comes with some exciting features that can double winnings, while matched reels can give players more chances to land a prize.

This 5-reel slot uses the 243 Ways to Win format, where conventional paylines are dispensed with and instead, punters just need to land matching symbols anywhere on 3 or more adjacent reels from the left side to collect wins.

Double Happiness surrounds the reels with ornate Chinese-style columns topped with a pagoda roof. Steep mountains and ancient temples are in view behind the main game, giving it a classical style that will appeal across Asia and beyond. Players will also see Mini, Minor and Major jackpot levels to the right side of the reels, with the values rising until someone claims the prize.

Playing card symbols are joined by traditional Chinese inscriptions that represent different paths to contentment, such as wealth, luck, longevity, prosperity, and happiness. There's also a special wild symbol that can complete winning combinations when it's seen on reels 2, 3, or 4, while also doubling the base value of the win that it helps to create.

On each spin, at least two adjacent reels will be matched, with the same symbol appearing on each. This can make it easier to land the same symbol across the game and claim prizes. It's possible that 3 or even 4 reels will feature identical symbols, leading to some huge payouts as multiple combinations are completed at once.

This appealing slot game brings to mind the Chinese proverb that ''Good things come in pairs.'' Look for this one at SA Gaming casinos.