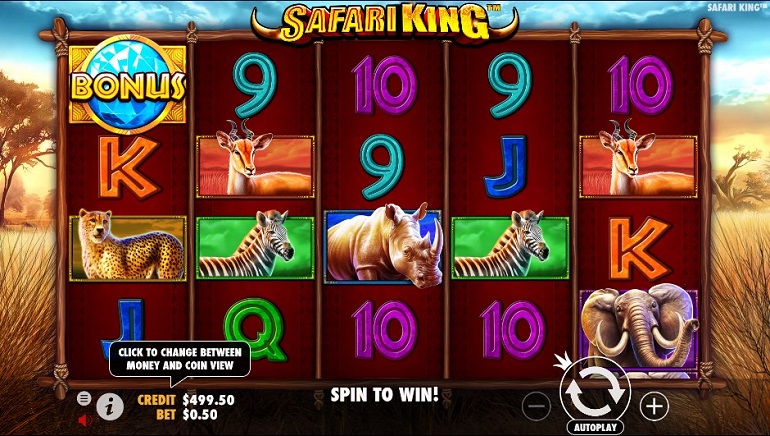 Safari King is a new slot from Pragmatic Play that will present players with a wildlife experience that is set on the African savannah.

Pragmatic Play casinos have now gained the brand new Safari King slot from February 2019. Participating casino sites will be able to provide access to the African savannah-inspired slot game, which is compatible on either desktop or mobile.

In the slot’s creation, developer Pragmatic Play decided to make the interface by using five reels and four rows. Therefore, Safari King is capable of displaying 20 symbols on a single spin. A variety of wildlife and playing cards have been used as symbols, and these can be aligned over the slot’s 50 fixed paylines.

Tapping either the minus or plus button will present the wagering options, which allows for the staking of up to ten coins, with each of those able to be priced from €0.01 up to €0.50. As a result, Safari King can accept a lowest wager of €0.50 and a highest of €250.00.

Pragmatic Play has graded Safari King as being four out of five for volatility. Essentially, this means that the wins are less frequent, but that players can higher-value jackpots. That much is clear from Safari King being able to payout 1,000x times a player’s bet in the base game.

A lion is used by Pragmatic Play as the wild symbol. This Safari King has the ability to appear within incomplete paylines and act as a substitute. The rules state that the lion wilds can only roam onto reels two, three, four, and five, and that they cannot appear in place of bonus symbols.

Bonus symbols can appear only on reels one, three, and five. Gaining three or more shall initiate free spins, which can be extended by one spin for every additional bonus symbol that appears. On top of unlimited free spins, this feature will also add one wild symbol for every turn of the reels.