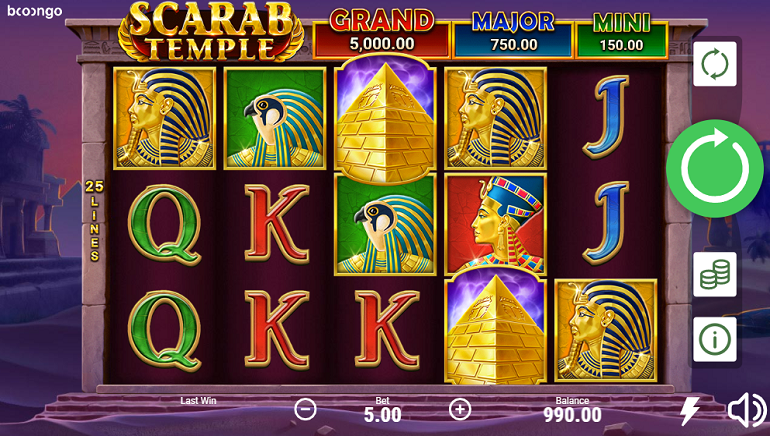 Booongo takes players on an adventure in Ancient Egypt with their new Scarab Temple online and mobile slot machine.

Scarab Temple is a new slot from Booongo where players find themselves among the pyramids and gods of Ancient Egypt. It's a 5-reel, 25-line mobile compatible game with jackpots and a Hold and Win respin feature. Players can wager between 0.25 and 60.00 per spin.

Sharp, colourful graphics bring an ancient civilisation to online casinos, with purple-hued pyramids and palm trees behind the reels. As well as classic playing card symbols, the Scarab Temple slot features Isis, Horus, a golden pharaoh mask, and a gleaming pyramid. A multi-colour wild symbol acts as others if it can then complete wins.

Three or more pyramid scatter symbols will trigger 8 free spins and only higher paying picture symbols, wilds, scatters, and scarab beetles are featured during the round.

Trigger the Hold And Win Feature

Bright red scarab beetles are key to a Hold and Win respins feature when landing in 6 or more places at once. The triggering beetles each carry a win value and lock onto the reels for an initial 3 respins. If more beetles appear, these also lock in place and reset the spin counter to 3. This carries on until no beetles appear for 3 consecutive respins, or they fill all 15 spots on the reels.

All of the combined values are paid at the end of the Hold and Win bonus, and filling the reels with beetle symbols triggers payment of a Grand Jackpot worth 1000x the total stake.  .

“With our popular Hold and Win mechanics combining with a lucrative free spins mode, Scarab Temple is set to be yet another engaging addition to our games offering. We can’t wait to see how it is received by our fans.”