School’s Out for Summer Comes to Blockchain Casinos 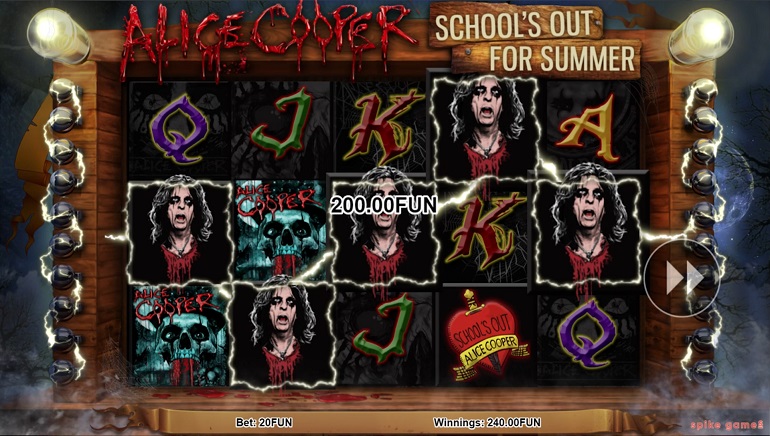 Alice Cooper's slot, School's Out for Summer is set to become a blockchain blockbuster now that it's available to players through the blockchain-based gaming provider, FunFair Technologies.

School’s out for Summer is the latest slot game from Spike Games and FunFair Technologies. This game's got plenty of bite, and it plays out on a 5 x 3 reel slot with 20 pay lines of rock 'n' roll entertainment. Launched back in November 2017, Alice Cooper School's out for Summer slot is now available to players at FunFair Technologies for blockchain casino enthusiasts.

School's out for Summer marks the second release of a Spike Games slot for blockchain this year. It was preceded by Ocean Blaster 2. School’s out for Summer is inspired by Alice Cooper, the legendary godfather of shock rock. The game features Freespins, Deathrow, and Twin Wilds. These 3 exciting bonus features ramp up the action to get players ready for the exciting gameplay. Alice Cooper's legendary electric chair-inspired win lines make for exciting entertainment in this game. The snake mouth bonus, Alice Cooper getting fried in the electric chair bonus, and the blood-scribbled FreeSpins notifications are chilling, to say the least...

Rock Out with Alice Cooper

During the game, players get to enjoy each of these amazing bonus features, notably the free spins bonus where players will gamble all the way up a snake ladder. While the Deathrow pick a win round is in play, players must flip the switch on the macabre electric chair to win a prize. This wild game had to undergo significant modifications to run on blockchain technology.

Now that this game runs on smart contracts, there is no need for a remote gaming server as is normally the case. Not only does this reduce the hosting costs for suppliers, it also guarantees fairness for players. The game fuses old school appeal and new-age technology in a mesmerizing display of entertainment. Alice Cooper’s raspy voice and heavy metal kicks up a storm 5 x 3 reels of blinding slots entertainment.