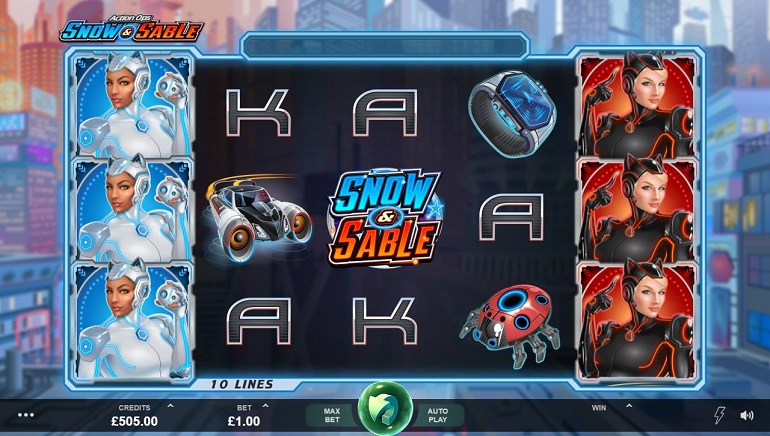 Action Ops: Snow and Sable is an exciting slot from Microgaming and Triple Edge Studios that features a futuristic setting and some out of this world bonus features

Action Ops: Snow and Sable is a futuristic slot machine developed exclusively for Microgaming by Triple Edge Studios. Players help a crime-fighting duo across the 5 reels of this 10-payline slot, which is now available at online casinos that use Microgaming software and games.

The space-age city of Aurora stretches out behind the reels, where cyber-agents Snow and Sable work with players to uncover valuable features such as free spins, stacked wilds and mixed wild payouts. Sci-fi style playing card symbols pay out smaller prizes, while robots, glasses and watches are also featured.

This female duo are both wild symbols who drive the on-reel action by acting as other symbols to create extra winning combinations. They can act on their own, or as a team to give players even more chances to land wins.

A scatter symbol will trigger 10, 15, or 20 free spins when it lands in any 3, 4, or 5 places at once. Snow and Sable are even more valuable during the bonus round, filling the outer reels on each spin. Players will be hoping to land matching symbols on the middle 3 reels to collect some big, 5 of a kind combinations. More free games will be added on if the scatter symbol is seen in any bonus spin.

Action Ops: Snow and Sable can be played across all devices from just 0.10 per spin and can pay out up to 1,000x the stake when the perfect combinations align.

He added that ''We look forward to unveiling more action-packed content from Triple Edge Studios in the coming weeks.''