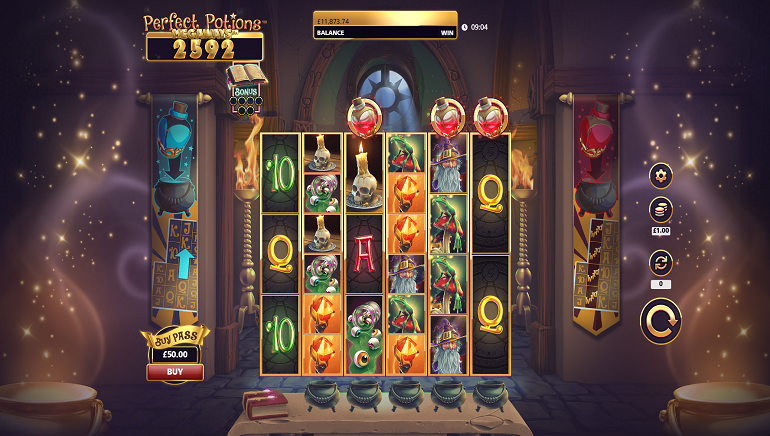 Perfect Potions Megaways is a new desktop and mobile slot from Scientific Games with magical features such as expanding reels, stacked wilds, and free games.

Scientific Games has revealed a brand-new magic-themed slot. Perfect Potions Megaways features a wise wizard, jars of eyeballs, and other ingredients across the 6 reels. Players have up to 96,040 ways to line up symbols for a win and it comes with features such as cascading reels, expanding wilds, and free spins.

The reels sit within a wizard's lair and other colourful symbols include a skull with candle, magic staff, and lower value playing card emblems. The Megaways system places a varying number of symbols on each reel.

Winning symbols vanish by magic, and new ones drop from above to fill the voids, and these cascades run for as long as they form new winning combinations. Blue and red potion bottles can appear, and if these cascade all the way to the bottom of the reels, they award special features. Blue potions double the number of symbols on the reel, while the red bottle fills the whole reel with wild symbols.

Scatter symbols award up to 15 free spins, and during this round, red and blue potion features are enhanced with random multipliers and reels that remain in their expanded forms for any remining spins.

This high volatility slot has an average payback percentage of 96.31% and players can spin the reels of desktop and mobile versions from 0.20 to 50.00.

Rob Procter, Content Specialist Director, Digital at Scientific Games, said: “Megaways™ remains as popular as ever with players, but we’ve pushed the boundaries with our latest magical creation to ensure it stands out from the crowd and offers players a brand-new experience.

“With the potions dropping through the reels and modifying both the base gameplay and Free Spins, Perfect Potions Megaways is a truly unique way of enjoying the industry’s highly sought-after mechanic. We’re particularly proud of developing such a complex game, which visually looks stunning.”