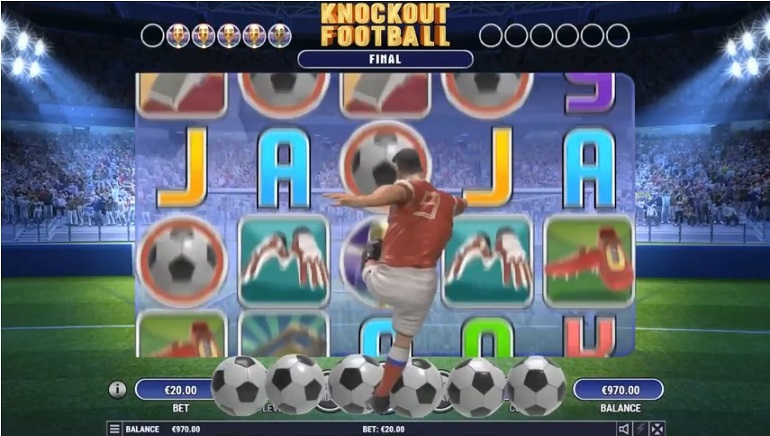 Knock-out Football is a slot game from Habanero that's been released in time for the World Cup tournament in Russia. Players will hope to score some big wins with unique features.

With the World Cup tournament now underway, it's the perfect time to cash in on football fever and play some soccer-themed slot games. Habanero are hoping to score with their new Knock-out Football game, which sees boots, whistles, gloves and playing card symbols appearing over the 5 reels and 20 paylines.

A Hat Trick Of Features

The game kicks off against a backdrop of a stadium filled with cheering fans and the sounds of the crowd can be heard alongside the mechanical noises of tumbling reels.

As well as hitting the back of the net with standard wins across the lines, players collect football symbols in a meter above the reels and once six have filled it up they get a free kick at the symbols, adding lots of extra wilds to the game for a great shot at winnings.

There's also wild trophy symbols that double any winning combinations that they complete and are also collected in another meter, with six golden cups triggering a free spins round. The wild football symbol moves around the pitch as these bonus games play out scoring high value goals when gets to either end.

There's up to 500x the total stake up for grabs in this knockout feature and punters can enjoy all the action across desktop PC's, tablets and mobile devices. A wide bet range and the high returns that Habanero slots all come with should help Knock-out Football become a hit as the World Cup progresses.

The Head of Corporate Communications at Habanero, Tony Karapetrov has said: “We’ve some great football to look forward to over the next few weeks and we’ve backed a winner with Knock-out Football.

“The game features our latest cutting-edge graphics and if players can find the target and add the cups to their collection, then they’ve got the chance to win big through the free knock-out game as well as the super striker feature.”