Score in the Hugo Goal Slot from Play’n GO 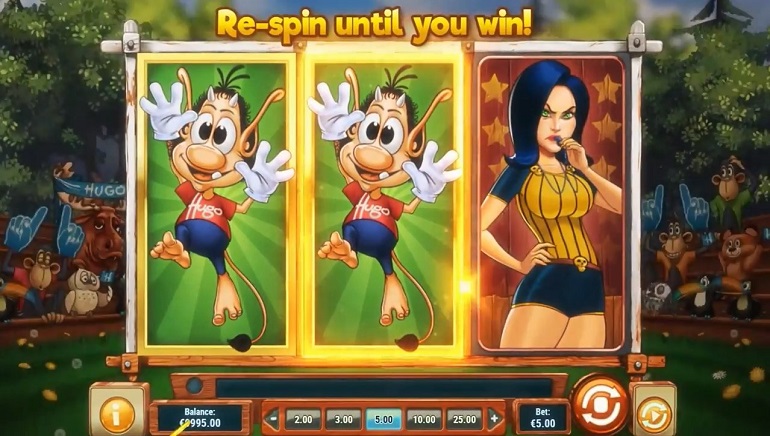 Football fans can get ready for the World Cup with the brand new Hugo Goal slot from Play’n GO.

Play’n GO has already developed two Hugo slots that were based on the Danish cartoon character derived from Scandinavian folklore. This latest release will see Hugo feature in a football slot that is now live at Play’n GO casinos in time for the 2018 FIFA World Cup.

The Hugo Goal slot is a more compact game compared to the prior releases in the series. In terms of design, the Hugo Goal interface is made with three reels and three rows, while the paylines clock in at five and the game is compatible on mobile or desktop.

All five of the paylines shall remain locked and active during gameplay. As a result, the lowest wager on the scale is €0.05, whereas the absolute maximum can be €100.00. Wagering can also be performed in an auto-play mode, whereby players can assign additional conditions, such as the number of spins or win/loss thresholds.

Hugo Slot also comes complete with special features, such as the Action Replay outcome. This entails the appearance of two fully stacked and matching character symbols on a non-winning spin, whereby the final reel shall continue to be re-spun until guaranteed winnings are delivered to the player.

Hugo appears as the main character and will also function as a wild symbol that can substitute for every other symbol in the game. The other character symbols in the cast include a stern female referee, a fearsome crocodile, and a goat commentator.

Free Kick is a similar feature to Action Replay, but this time the landing of two full stacks of matching item symbols are required on a non-winning spin. At this point, the final reel shall be re-spun to give the player a second chance of earning some winnings.

Up next is Penalty Shoot-Out, which is the centrepiece feature of the slot. Activation of the Penalty Shoot-Out will call for players to fill the three reels with matching symbols. Players then take control of Hugo, who is tasked with saving five penalty kicks. Saving all five of the kicks will move the multiplier bar all the way up to 10x.