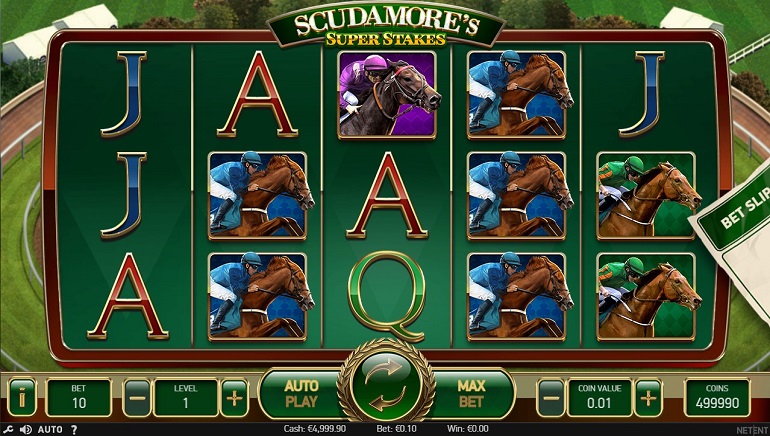 NetEnt has developed its very first sporting slot with the release of Scudamore’s Super Stakes, which is based on horse racing jockey Peter Scudamore.

Scudamore’s Super Stakes is a recent release that marks the first time that NetEnt has ever developed a video slot in the sporting world. Star of the slot is eight-time champion jockey Peter Scudamore, who is best-known for winning Royal Ascot and the Kentucky Derby, among other renowned horse races.

The game has been made much like other online slots in that players will see five reels and three rows of symbols. With each spin, players will try to match jockeys, horses, playing cards, and bonus symbols on the 20 fixed paylines.

When playing Scudamore’s Super Stakes, the slot allows for the coin value to start at €0.01 and jump up to €1.00. Meanwhile, there are also betting levels that can climb from one up to 10. This ensures a breadth of wagering options that vary from €0.10 all the way to €100.00.

Peter Scudamore acts as the wild symbol that has the ability to substitute for most others except for scatters or in the Bet Slip bonus game. If five or more wilds appear on a payline, then this will lead to a 1,000x multiplier getting awarded. Wilds can even land randomly following horse shoes.

The trophy scatters can cause the Peter’s Classic Cup feature to be activated when symbols land in unison on reels one, three, and five. Peter’s Classic Cup will add another row of symbols and commence a race. The player can win a 5,000x multiplier if they correctly pick the winner, while the paylines increase to 32.

Bet Slip is a mini-game in which players can lay down a stake on how frequently a specific symbol shall appear. For example, the aim can be for the wild symbol to appear 11 times in 10 spins, with a suitable payout granted as a reward for doing so – three other tiers are available above that.