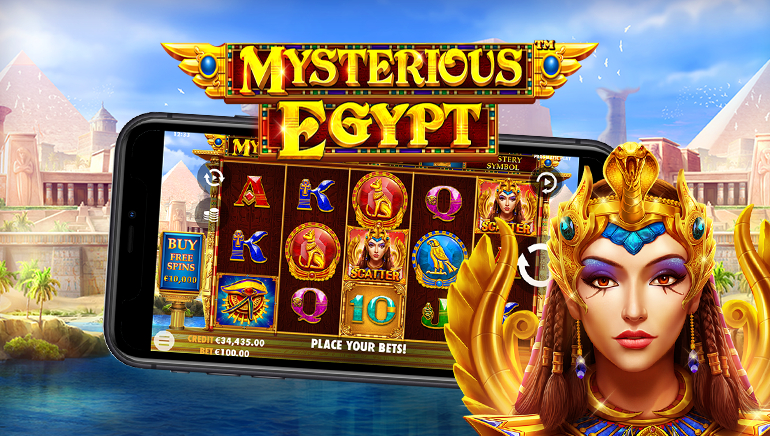 The new slot from Pragmatic takes players on an adventure across Ancient Egypt, offering a chance to score big wins in the bonus and during regular spins alike.

Although there are countless slots featuring the theme of Ancient Egypt in one way or another, it seems that this particular theme never goes out of style. Pragmatic Play is probably banking on this fact with their new release called Mysterious Egypt.

The new Mysterious Egypt slot offers the usual 3x5 setup and just 10 paylines, which may seem like a low number in comparison to many new titles we've been seeing recently. However, quality graphics and some interesting features make this game well-worth checking out.

Players who enjoy Egyptian-themed games will probably find symbols quite familiar. There are pyramids, golden birds, cats, and the Eye of Horus, which is the highest paying symbol, awarding 500x for the full line. The scatter symbol acts as the wild and triggers the bonus feature.

Expanding Symbols All Over the Place

Mysterious Egypt offers just one special feature, which is the expanding symbol bonus round. The bonus is triggered by landing three or more scatters on the reels, but instead of the usual one, two symbols are selected to act as expanding scatters during the feature. Players are awarded 10 free spins initially, but the bonus can be re-triggered indefinitely.

What's new about the Mysterious Egypt slot is that the expanding symbol feature is also active on every spin in the base game. At the start of each spin, one symbol is randomly selected to act as the expanding symbol for that spin. If two (for higher paying symbols) or three of them land on the spin, they will expand to create additional wins.

All in all, the new Pragmatic Play slot may not be revolutionary, but it brings enough innovation to make it worth a try as the maximum win of 5,000x can land on any spin, even without the bonus. The game offers top-quality graphics and is fully optimized for play on mobile devices as well.