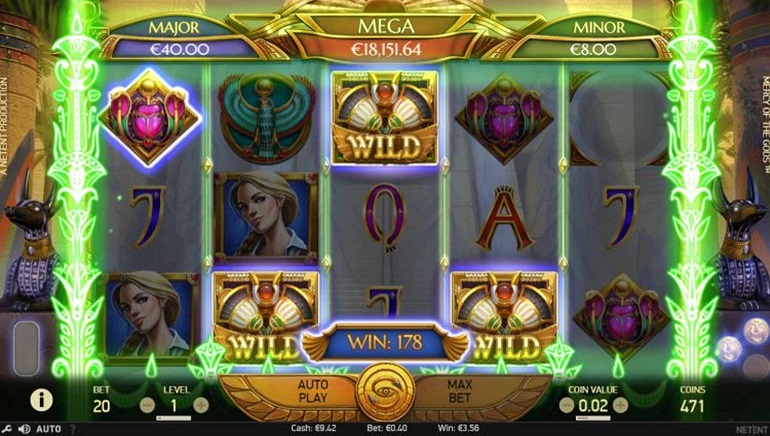 Players can hunt for Ancient Egyptian relics in the brand new Mercy of the Gods slot developed by NetEnt for summer 2019.

For years, Ancient Egypt has been a rich hunting ground for iGaming software providers, and the most recent to seek inspiration there is NetEnt. The Swedish-based company has developed the brand new Mercy of the Gods slot for a July 2019 release across NetEnt casinos.

Mercy of the Gods has been developed using NetEnt’s Divine Fortune mechanics, so as to ensure visual clarity and functional performance across compatible desktop and mobile devices, including Android, Windows, and Apple.

A gleaming trove of relics can be spun over the five reels and three rows to create matches for the 20 paylines. The return to player (RTP) has been set at 96.64% for what is described by NetEnt as a highly volatile slot, meaning that the risks and rewards are greater than low volatility slots.

The heroine archaeologist is the most rewarding of the base symbols, with a 1,600x multiplier given when five are matched. There is also an Egyptian eagle worth up to 1,200x and a relic comprised of purple gems at 900x.

Wild symbols are the entry-level for the special features and can be used to substitute only for base symbols. They also play a role in Gift of Life Re-spins, whereby wilds move a row down until disappearing. The continued appearance of wilds will keep the feature running, while vertical clusters can form expanded Gift of Double Wilds.

The Eye of Horus scatters are capable of triggering five, eight, or 12 free spins when three, four, or five scatters land, respectively. Free spins can also provide the potential for stacked wilds to fill a whole reel and Gift of Life Re-spins can also be unlocked.

Above all the other features is the Gift of Wealth Jackpot sought by the archaeologist. Little does she know is that three or more bonus coins are needed to stand a chance of winning. Once triggered, the bonus symbols appear on top of the reels.

Each coin is then given a random value of 10x to 200x, with one row of coins equalling the Minor level jackpot. Two rows are needed for the Major level and three for the Mega Jackpot.