Set Sail For The Jolly Roger 2 Slot From Play'n GO 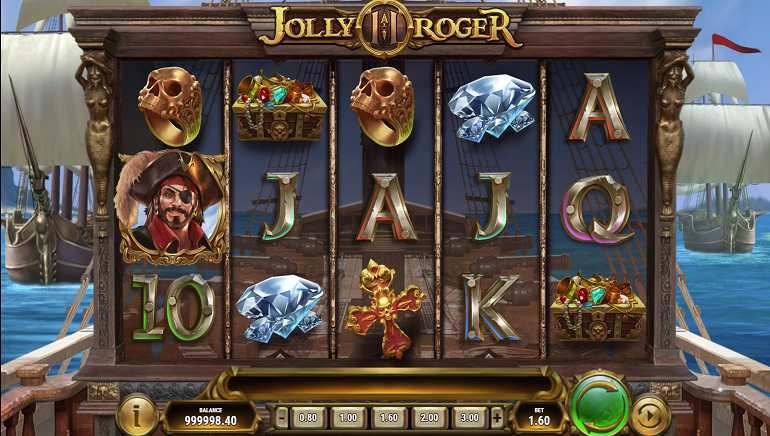 Play'n GO take you on a high seas adventure with the new Jolly Roger 2 slot. It's packed full of features to help players plunder online casinos.

Players can enjoy a swashbuckling adventure with the new Jolly Roger 2 slot from Play'n GO. It's the sequel to a popular game and packs even more thrilling gameplay and bonuses into the 5 reels. Free spins with treasure collections, stacked wilds, and a special sea-battle free games round are available.

The 5x3 grid of symbols sits on the deck of a pirate ship, flanked by other vessels on the high seas. Along with playing card icons, the Jolly Roger 2 slot uses detailed themed symbols such as a golden skull, jewelled cross, and treasure chest. A compass above the reels randomly spins to multiply winnings by 2x, 3x, 5, 8x,or 10x. The infamous skull and crossbones flag is a high paying wild symbol, and the Captain is the scatter symbol who unlocks a Bonus Quest feature.

Start The Quest For Treasures

Players match 3 scrolls to find out which feature they receive. There are instant prizes of up to 20x the stake, Bottle of Rum free games with stacked wilds, and the Battle free spins.

In the Battle round, players claim bounties by defeating British, Portuguese, or Dutch ships across a 3x3 grid. Once the battle is over, the bonus games start with any modifiers they claim activated throughout the round. These include stacked wild reels, all high value symbols transformed to the most valuable, sychronised reels, and extra wilds.

The Treasure Hunt free games task players with finding maps to add extra modifiers to the gameplay. An initial 10 games play out, but by finding the 4 pieces of a map, modifiers such as symbol upgrades and win multipliers from a compass wheel.

Medium Volatility On The High Seas

Jolly Roger 2 is a medium volatility game with an average payback percentage of 96.2%. It's available to play in desktop and mobile formats from 0.20 to 100.00 per spin, and potential wins reach 5000x the stake.