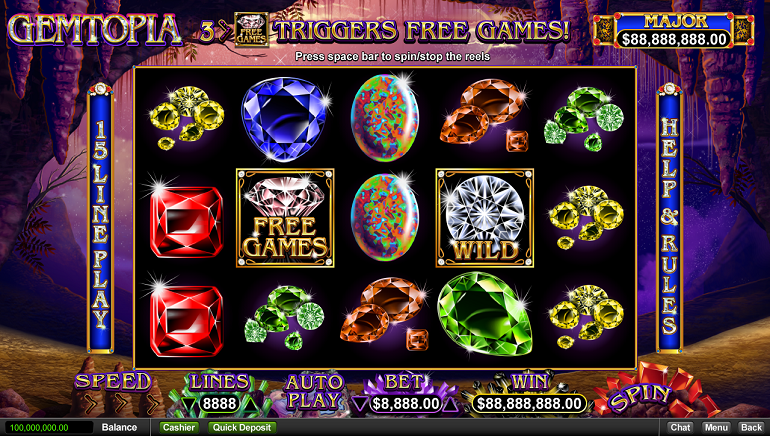 Match up dazzling symbols in the new Gemtopia slot at RealTime Gaming for the chance to win 1,000 times your bet.

Gems and jewels have been popular staples of games ever since Bejeweled was first released on XBOX in 2001 before later reaching smartphones. And RealTime Gaming (RTG) is the latest software developer to further trend by releasing a new video slot that uses gems and jewels to form the core symbols of the game.

RTG casinos have had a positive year so far, with the developer delivering several new slot games. Gemtopia is releasing today, giving players another new option to enjoy alongside the likes of Cash Bandits 2 and Kung Fu Rooster. Year after year, RTG continues to invest in new gaming content for players.

The high level of mobile compatibility will allow for even more gamers to try and match up gems and jewels on this five-reel slot. Each spin will present 15 dazzling symbols on the screen, with players having the chance to earn winnings from various combinations along the 15 paylines.

Gemtopia will enable wagering from only $0.10 per spin, while up to five coins per payline will be accepted from high rollers. And players will not just be spinning to win on the paylines, but also from the special features that have been added.

The wild re-spins will be a helpful way of keeping the action going, but players will also be interested in the free games and associated bonus picks. After triggering free games, players will be looking to win 1,000 times their bet by touching one of the bonus gems that can appear at this stage of the game.