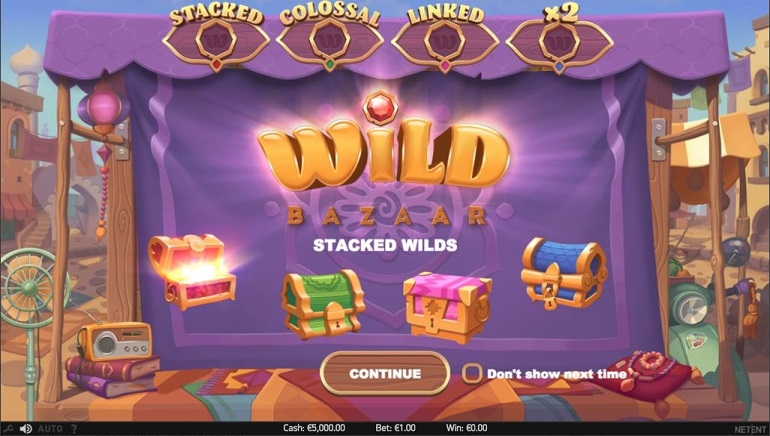 With four base-game features triggering all the time instead of just one or two hard-to-trigger bonuses, Wild Bazaar offers a much more engaging and entertaining gameplay.

Another slot developed by NetEnt has been released today and the Swedish developer has clearly put its team's imagination to the test with this one. The Wild Bazaar slot is a 26-payline game with colorful graphics and a number of base game features that trigger constantly instead of a single bonus that players sometimes have to chase for hundreds of spins.

A World of Colorful Trinkets

While the graphics aren't too complex, NetEnt has done a fine job to bring the game to life with funny animations and traditional oriental music playing in the background, creating a real bazaar feeling as players spin the reels, looking for a bargain.

It's All About Wilds

As mentioned, the Wild Bazaar slot doesn't have a single bonus feature like most NetEnt slots. Instead, lining up three or more chests of the same color triggers one of four base-game features: colossal wilds, stacked wilds,  linked wilds, and multiplying (2x) wilds.

Thanks to this in-game dynamics, Wild Bazaar offers exciting gameplay with every spin having a potential to start an avalanche of free spins leading to big wins. With various features triggering all the time, players are also kept entertained all the time, making the game much more engaging.

The Wild Bazaar slot is now available for play across the number of leading NetEnt-powered online casinos.