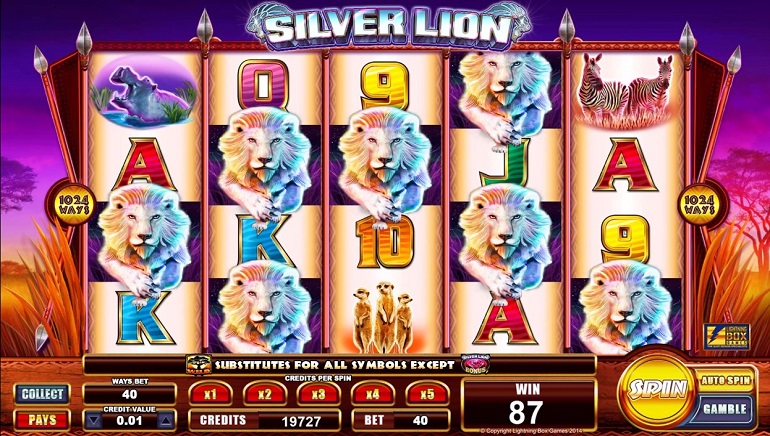 Lightning Box Games has just launched its latest slot, Silver Lion, exclusively at LeoVegas Casino. Silver Lion plunges players into the plains of Africa as they track the mythical Silver Lion, while accruing sizeable wins along the way.

Lightning Box Games has recently launched its latest slot, Silver Lion, found exclusively at LeoVegas Casino at the moment. Silver Lion is designed in HTML5, which makes it optimal for both mobile and desktop play. The graphics and sound effects plunge players into the plains of Africa as they track the mythical Silver Lion, accruing sizeable wins along the way.

Silver Lion is a 5-reel, 4-row, 1024 ways-to-win slot that takes players on an animal-filled adventure across the African Safari. Bets can range between 40p to £50 per spin, making it an attractive game to players of different sized bankrolls.

As for the African theme, zebras, hippos, meerkats, tribesmen, trees (wilds) and of course, the Silver Lion (scatter), grace the reels, and players only need to land two of these higher value symbols to create a winning combination.

Bonus Round Can Yield Big Wins

In all, the gameplay of Silver Lion is simple but the potential payouts are big, especially if you place higher bets and end up with the 27x multiplier. While similar slot games already exist, Lightning Box Games has done a good job with a theme that has mass appeal.