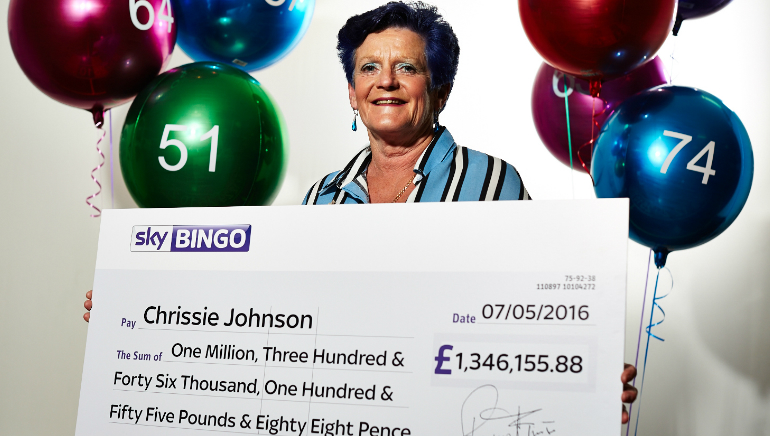 Chrissie Johnson, a chiropodist from Wales, is the latest Sky Bingo millionaire. One year after joining the network, she won £1,346,155, playing one of the video slots provided by Playtech - Chests of Plenty. The gambling operator offers an eclectic mix of bingo games and slots, including some carrying a progressive jackpot.

The popularity of online bingo rooms is on the rise and Sky Bingo presents its members with a chance of playing most of the popular versions. Video slots were relatively recently added to make the collection of games even more attractive and provide players with more options. Chests of Plenty is a five reel video game with a pirate theme and carrying a progressive jackpot.

Chrissie won £300,000 after spinning its reels for less than 20 minutes and the progressive jackpot was added on top of her winnings. This happens to be one of her favorite slots provided by the software developer, with fine graphics and a friendly gaming atmosphere. It was developed by Playtech for its bingo division and it appeals to the same customer base that enjoys the social nature of bingo.

The seven digit figure is a life-changing amount for the lucky winner and also represents an important milestone for Sky Bingo. It is the biggest prize ever awarded to a bingo player and Johnson’s success is expected to reverberate throughout the entire community. One of the reasons for why online bingo has gained so much traction is that players can interact with each other using the chat feature.

The fact that both games can be played on mobile devices also helps. It’s no coincidence that over the last couple of years, the bingo industry in the United Kingdom has increased by 25%.