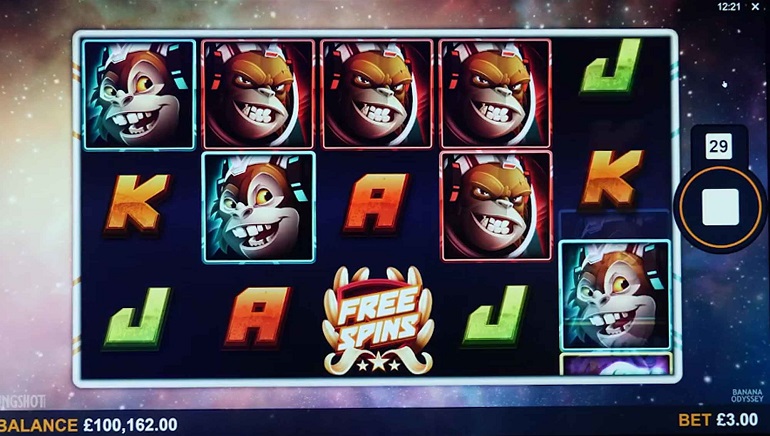 Banana Odyssey is designed as a fun new slot from Slingshot Studios, with access available to users across participating Microgaming casinos.

Banana Odyssey is an exclusive new video slot that's available now at Microgaming casino sites. This new release is the very latest title from Slingshot Studios, the independent developer that was responsible for producing A Dark Matter, Cash of Kingdoms, and Zombie Hoard.

The slot tells the tale of two space-faring chimps named Buck and Chip, whose aim is to travel to the Banana Planet on an intergalactic quest for tantalising winnings. In producing Banana Odyssey, Slingshot Studios aimed to balance technical quality with an experience that was ultimately fun.

Development of the game called for a familiar five-reel, three-row structure favoured by video slots. Layered over the reels are the 10 invisible paylines that only become apparent once they have resulted in a payout.

To shake up the experience, the studio has innovated by designing the paylines to pay both ways. In most cases, online slots have paylines that activate in a sequence that runs from left to right, whereas Banana Odyssey sees them also trigger from right to left.

An expanding wild symbol has been included and can activate once it lands on the second, third, or fourth reel. This results in each of the visible wilds maximising to cover the entire reel. After expanding, the slot locks the wilds in place and performs a re-spin, with the potential allowed for further spins.

The middle reels again come into play with the scatter symbols. These can deliver 10 free spins, but only when three scatters are landed simultaneously on each of the reels. At this point, it’s also possible to combine locked wilds with the free spins.