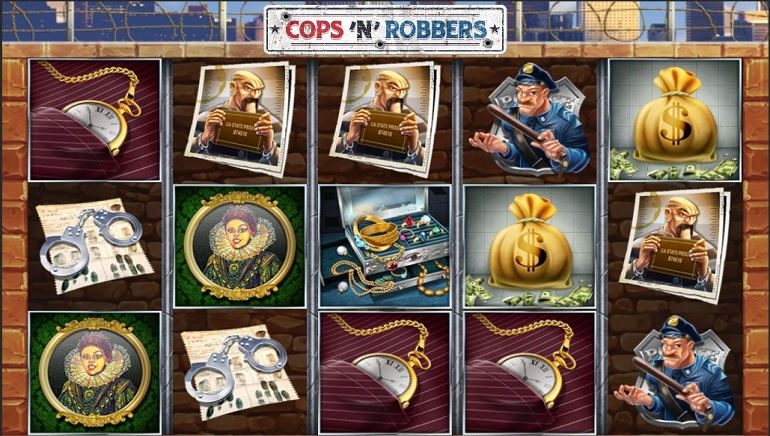 The boys in blue are in hot pursuit of a gang of hardened jewel thieves. Catch them if you can in Cops 'n' Robbers slot game.

Play'n GO's Cops ‘n’ Robbers set for release Thursday May 10, is a slick and gritty video slot game set against a towering city skyline. This adventure-laded game features gold bullion Wild symbols, a Car Chase bonus with free spins, and barbed wire on brick walls to keep the robbers at bay. This feature-rich slot is superbly crafted with oversized reels and intricately detailed images. Players have the police dossier on the robbers, the jewels, and the heist that’s taking place.

Cops ‘n’ Robbers is a 5 reel, 3 row , 9 line video slot by leading game maker Play’n GO. The Wild symbol is represented by the bank vault with gold bullion stashed inside. The Wild doubles all wins and substitutes for other symbols to form winning combinations, except for the Police Cruiser Scatter symbol. When 3+ Police Cruiser Scatter symbols land on the reels, the car chase bonus round begins. Players will enjoy double the free spins if they manage to escape. Scatter wins are multiplied by the total wager and added to payline winnings.

One of the most exciting aspects of Cops ‘n’ Robbers is the interactive nature of symbols in the game. Nothing is static. There are 5 high-paying symbols including the gold moneybag, the purple sack of diamonds, the jewelry box, the aristocrat's portrait, and the gold pocket watch. If you look closely at these symbols, you will notice an anonymous thief with black gloves snatching these high-end items from your screen.

The low-paying symbols in the game include the cops and robbers. The mean-spirited policeman with his baton in hand is a menacing force in the game. Next up is the robber locked behind bars, the robber getting his mug shot, and a pair of handcuffs. Each of these icons festoons the reels in this engaging smash and grab slot game. Players can easily enjoy autoplay functionality with 20, 50, 100, 250, or 500 spins at pre-set bets. You can also adjust your gameplay based on single win amounts, balance increases/decreases, or free spin gameplay.

Cops ‘n’ Robbers is a hard-core look at the underbelly of the city streets. It’s got terrific interactive features, funky beats, and plenty of animation to keep the storyline flowing. With just 9 lines in play, this bullet-riddled slot game takes you on an exciting crime-fighting adventure.