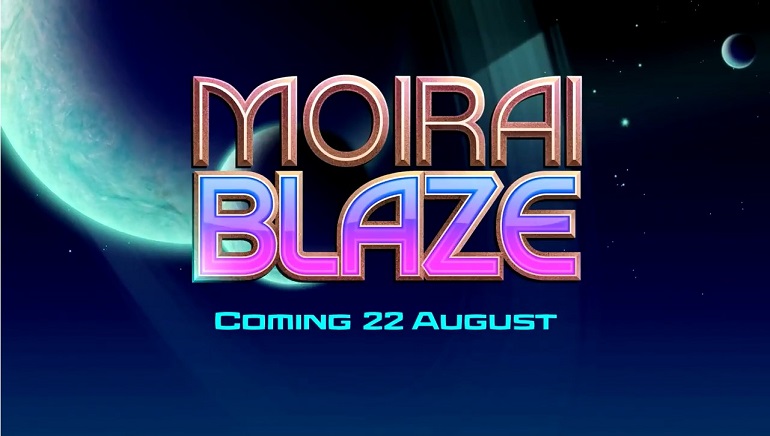 Iron Dog Studio has released details of their newest slot machine. Moirai Blaze is a feature-packed game that plays out on a 7x7 grid of symbols and is due to be launched next week, on 22nd August.

Out Of This World Gameplay

The game is themed around Lakshmi, the Goddess of Wealth and the festival of lights, although the action takes place against the backdrop of an alien planet, surrounded by vast moons and strange plant life. Lakshmi stands to one side of the reels and oversees the multiple features that can be triggered.

In normal gameplay, the colourful orb symbols in winning combinations will disappear to leave space for new ones to drop down in to, potentially leading to new wins, which will repeat the process. Blocks of 5 or more symbols are needed to claim a prize, while special modifier orbs can help to bring in extra winnings.

A wild symbol replaces others to create extra combinations, while the Replacer symbol can either replace all symbols in a diagonal cross shape, or all symbols of one type on the reels with another random type. Exploder symbols will destroy others of a single type, leaving a wild in its place.

If 100 or more symbols are destroyed in a sequence of cascades, players are awarded 15 free spins. During these bonus games, the modifier symbols will still be in effect, but a meter to the side of the reels will record how many times each turned up in the free games feature.

On the last spin, all the collected symbols are placed back on the reels. There's also a special Ganesha Powerball symbol that adds extra spins and win multipliers during the bonus round.

Moirai Blaze is a unique and innovative game, with a distinctive style that can be played on desktop and mobile platforms when it's released on August 22nd, look for it at Iron Dog Studio casinos.