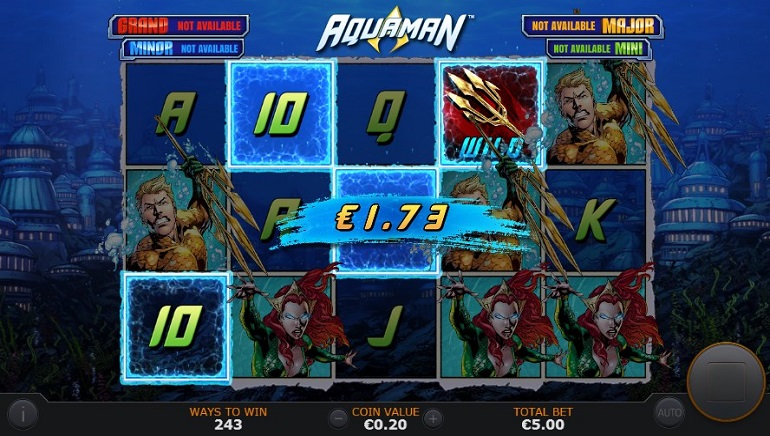 Timed to release at the same time as the DC Comics anticipated blockbuster, Playtech’s new slot, Aquaman, is packed with action and special features. The slot, as fans may notice, is more reminiscent of the actual comics than the film, featuring underwater Atlantis in the background and comic versions of Aquaman and 3 villains. As most Playtech slots, Aquaman boasts superb graphics and plenty of winning opportunities, including respins, free spins, and 4 progressive jackpots.

Aquaman is a 5-reel, 243-ways-to-win slot that’s playable on all devices. Bets range between 25p and £500 a spin and the RTP is 95.99%. Symbols include A, K, Q, J, and 10, villains, Mera the red-haired warrior, and Aquaman. Aquaman is the highest paying symbol, rewarding 20x your stake when 5 land across a payline. The trident symbol is wild and there's also a Free Games scatter.

When the Aquaman symbol lands fully stacked on reel 2, the Trident Wild Respins feature is triggered. During this feature, Aquaman throws his trident onto the reels while they’re spinning, transforming 3 adjacent symbols into locked wilds. The reels respin again until you get a winning combination, with the locked wilds stuck in place.

When the Mera symbol lands fully on reel 4, the Ocean Rush Respins feature is triggered. During this feature, Mera randomly chooses a symbol to become locked; if more of the same symbol land, they also lock into position. In rare instances, the Aquaman symbol can land fully on reel 2 and Mera on reel 4; this triggers both respin features and is where the big wins can happen.

When 3 or more scatters land on the reels, you’ll win 8, 12, or 16 free spins. You’ll also be able to collect Golden Aquaman symbols, which transform villain symbols into Aquaman for increased winning opportunities. Also, if you score a winning combination that uses a wild, you’ll get between a 2x-4x multiplier. And if 2 or more scatter symbols land on the reels, players can win up to 16 additional free spins, and there is no limit to how many times the free spins can be retriggered.

Aquaman is part of the DC Super Heroes Jackpot network, which includes 4 jackpots: Mini, Minor, Major, and Grand. The jackpot feature is triggered randomly and guarantees a jackpot win.

Aquaman fever is gripping the world, and Playtech did a great job at jumping on the bandwagon and creating a fun, action-filled slot. Winning opportunities are practically around every corner, with respins, free spins, and progressive jackpots all within reach. Even if you're not the biggest fan of Aquaman, there's still plenty to enjoy in Playtech's new slot. Check it out at Playtech online casinos.