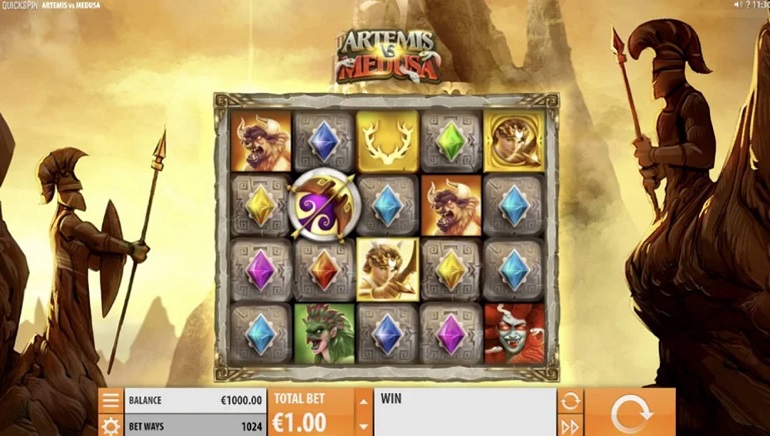 Artemis vs Medusa is a Greek mythology-themed slot from Quickspin, and the action in this game comes from Monster Bounty Coins and Unlimited Battle Free Spins. But players, be warned, this slot is as volatile as it is epic.

Artemis vs Medusa is a Greek mythology-themed slot from Quickspin, and it’s refreshing that the developer chose to focus on two lower-profile heroines. Artemis is the goddess of the hunt while Medusa is the monstrous woman known for turning men to stone with a glance. The reels are set against Mount Olympus with stone soldiers on either side ready for battle. The action in this game comes from Monster Bounty Coins and Unlimited Battle Free Spins. But players, be warned, this slot is as volatile as it is epic.

Symbols include low-paying diamonds in different colors and medium-paying harpies, griffins, minotaurs, and Medusas. The only high-paying symbol is Artemis, which pays out 25x the stake for 5 of a kind. There is also a golden antler wild and a bow and arrow scatter.

Medium-paying symbols can randomly come with a Monster Bounty Coin, which can be collected when the Artemis symbol lands in a golden frame on the last reel. After the coins are collected, a Bounty payout is awarded. The payout is calculated based on the medium-paying symbol value and the number of coins on the reels.

When 3 scatters land on the reels, the Unlimited Battle Free Spins round is triggered. When that happens, a battle is launched between Artemis and Medusa. When an Artemis symbol lands on the reels, all monster symbols in view are collected on a special meter. Also, 1 monster is removed from the meter. If the meter exceeds 15 or Artemis kills all the monsters, the round ends.

Artemis vs Medusa is a slot that has a gaming quality to it, with the features revolving around gods, monsters, and fierce battles. The maximum win is 5,286x the stake but reaching it is hard with a slot that’s so volatile. Still, there is plenty of action and many opportunities for players to win prizes and free spins. Artemis vs Medusa can be played at Quickspin online casinos.