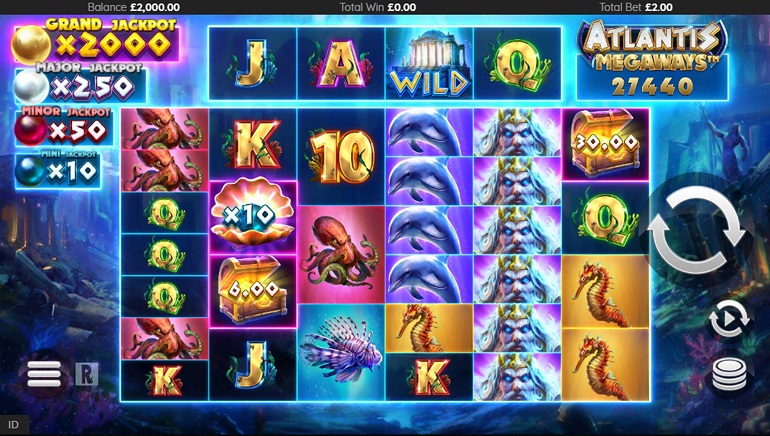 Atlantis Megaways from ReelPlay takes players down to the depths of the mythical lost city, where they can find all sorts of treasure among a beautiful array of sea creatures and gods.

Atlantis Megaways from ReelPlay takes players down to the depths of the mythical lost city, where they can find all sorts of treasure among a beautiful array of sea creatures and gods. Players can look forward to cascading reels and a Jackpot Respins feature that boasts 4 jackpots of varying sizes. Atlantis Megaways can be played at ReelPlay online casinos, and with a max payout of 8641x the stake, testing out the waters can be worthwhile.

Atlantis Megaways is a 6-reel slot that has a varying number of ways to win, or Megaways. Each reel randomly displays between 2 and 7 symbols, allowing for a minimum of 324 and a maximum of 117,649 Megaways. Wins are formed when 3 or more matching symbols line up across adjacent reels. When a win is scored, the participating symbols disappear and new ones fall into their places.

Symbols include A-10 royals, lionfish, seahorses, octopi, dolphins, and Poseidon. The latter is the highest-paying symbol and awards 100x the stake when 6 land in combination. There is also an ancient temple that acts as a wild and a treasure chest scatter, which only appears on the horizontal reel above the main grid.

When 6 or more scatters land on the reels, the Jackpot Respins feature is triggered. Players are awarded 3 respins while all scatters are held in place. If new scatters land, they also remain stuck in place and the respins get reset back to 3. The feature ends when the respins are finished or the entire grid is filled with scatters. When it ends, the total prize is counted. Each scatter gives a cash bonus that ranges anywhere between 1x to 100x the total stake and the max win is 6,250x the stake.

Atlantis Megaways is one of the more beautiful slots out there, with its vibrant colors and immersive graphics. The actual mechanic of the game is virtually identical to the developer’s previous game, Hypernova Megaways, which is a bit disappointing in terms of originality. The disappointment doesn't last long, however, since the 4 jackpots and max win of 8,641x the bet more than make up for it.