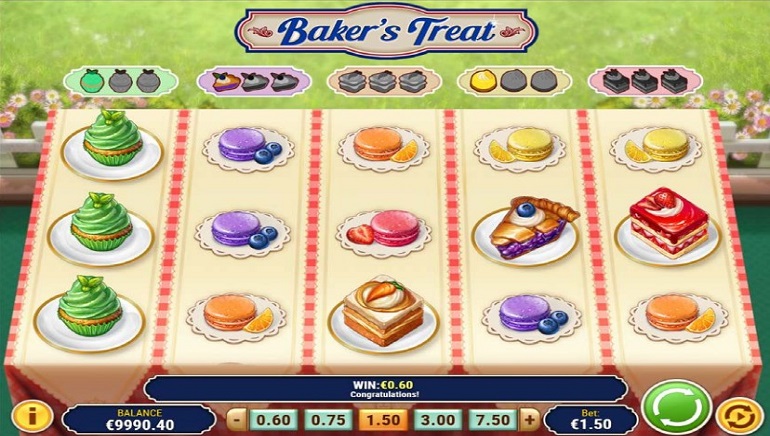 Baker’s Treat is a 5-reel, 15-line, two-way-pay slot that features a light and fluffy theme but is actually fairly volatile, and packs behind it some powerful punches that can result in winning up to 5000x your original stake on a single spin.

Play’n GO’s newest slot, Baker’s Treat, was released last week, and we recommend that you don’t start playing while hungry. Baker’s Treat features all sorts of delicious baked good, including cakes, frosted cupcakes, pies, and macarons. But more than featuring an eyeful of sugary delicacies, Baker’s Treat is a fairly volatile slot that has the potential for big payouts.

Baker’s Treat is a 5-reel, 15-line, two-way-pay slot that features a light and fluffy theme but is actually fairly volatile, and packs behind it some powerful punches that can result in winning up to 5000x your original stake on a single spin. On the other hand, it may not.

The slot background is a table and the reels, filled with mouth-watering desserts, spin on top of it. The strawberry sponge cake symbol is the highest-paying symbol, awarding 2x, 8x, or 40x your total stake if you land 3, 4, or 5 of them respectively.

Above each reel is a cake symbol, which plays a part in triggering the game’s special features.

You’ll need to collect cakes by stacking symbols on their associated reels; when the collection is completed, the Flour Power Spin Feature will be triggered. This feature includes wild reels, duplicated reels, and symbol upgrades.

When all 5 cake symbols land on their associated reel on the same spin, the Bake Off feature will be triggered. In this feature, you’ll get a series of free spins and all of the Flour Power extras will come up in turn. If you see a stacked symbol on its associated reel, you’ll win up to 10 more Bake Off spins, which are great because they include all those extras.

Players who love slots that feature adventure and exotic exploits probably won't enjoy Baker's Treat. However, it’s certainly an interesting combination of a sweet, light-hearted theme and volatile special features. And despite its cheerfully sweet theme, it can definitely appeal to those who want the chance to win large payouts but don’t want the suspense and action of adventure-themed slots.

Players can expect to find this sweet new slot at online casinos powered by Play’n GO.