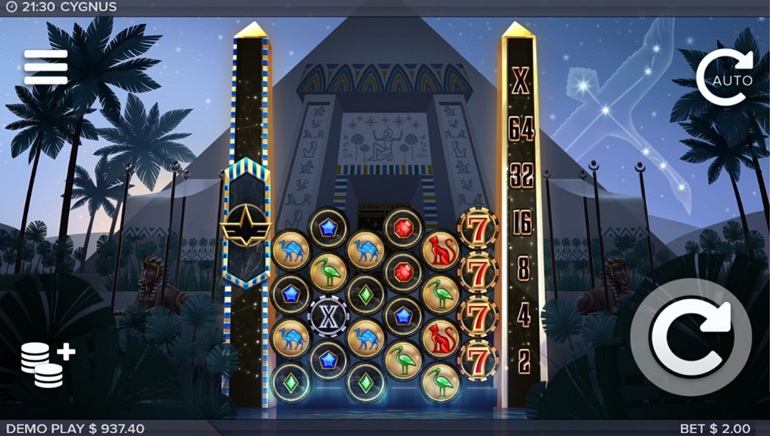 ELK Studios' new slot, Cygnus, is a fast-paced game thanks to the Avalanche feature, which creates room for up to 8 rows. And as if that wasn’t enough, there are also free spins and multipliers up to 64x.

Cygnus is the latest slot from ELK Studios, and its interesting name comes from the Northern constellation that lies on the plane of the Milky Way. The backdrop is a pyramid in Ancient Egypt and the grid sits between two pillars. The game is fast-paced thanks to ELK's Avalanche feature, and as if that wasn’t enough, there are also free spins and multipliers up to 64x. Cygnus can be played at ELK Studios casinos, on desktop and mobile.

The reel symbols are circular and include 3 gemstones, a pelican, camel, cat, and a lucky number 7, all in the style of hieroglyphs. The latter is the most rewarding symbol — when 6 land in combination, players win 30x their stake. There are also wilds and scatters to keep things interesting.

Wins are scored when 3 or more of the same symbol land across successive reels, but the really interesting thing about Cygnus is the Avalanche feature. The Avalanche feature means that at every time a winning combination lands, the symbols combust and the ones on top fall down and another row of symbols appears. The max number of rows is 8, and with each additional row, the number of ways-to-win increases. When 9 rows are on the grid, the ways-to-win increases to a maximum of 262,144.

When the bonus symbol gravitates toward the left pillar, the Free Drops Bonus Feature is triggered. In this feature, players get 7 free spins, which are played on 8 rows with 262,144 ways-to-win. Multiplier scatters are in effect in this feature and they are sticky, which means that the max 64x multiplier is easier to get. The feature can be retriggered for a total of 14 free spins.

ELK Studios has done a great job of taking an old theme and creating a new, refreshing game. While the slot does bear similarities to ELK’s Gold Series of slots, it has enough unique features to make it stand apart. For players looking for a break from the typical grid setup of other slot games, Cygnus is a great choice.