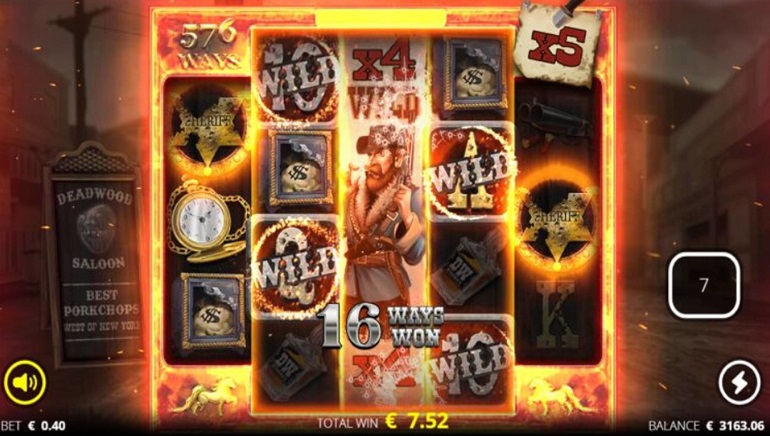 Deadwood from Nolimit City is the sequel to the developer’s popular Tombstone slot. This Western-themed game is packed with expanding wilds, multipliers, a Shoot Out feature, 3 free spins rounds, and a maximum win of 13,950x the stake.

Deadwood from Nolimit City is the sequel to the developer’s popular Tombstone slot. This Western-themed game is action-packed with expanding wilds, multipliers, 3 free spins features, and a whopping max win of 13,950x the stake.

Deadwood from Nolimit City is a 5-reel, 576-ways-to-win slot that’s playable on all devices. Bets range from $.10 to $100 per spin and the RTP is 96.02%. While the slot is highly volatile like its predecessor, Nolimit City has given the hit frequency a boost for a more balanced game.

Symbols include lower-paying 10 to A royals and higher-paying shotguns, whiskey bottles, safes, watches, and gold bars. The latter is worth the most, paying out 3.75x the stake when 5 land across a payline. There is also a Hunter Wild and Sheriff Badge scatter, both of which trigger base-game features.

The Hunter Wild can land fully stacked on the 3 middle reels. When this symbol lands partially in view, it gets nudged so that it covers the full reel with the xNudge feature. For every nudge, the win multiplier increases by 1x. If more than 1 Hunter Wild lands, the multipliers are combined.

When the sheriff’s badge scatter lands on reels 1 and 5, the Shoot Out feature is triggered, during which all low-paying symbols on the middle 3 reels are transformed into wilds.

When 3 buffalo skulls land anywhere on the reels, players can choose between 2 free spins feature: Gunslinger Spins or Hunter Spins.

Gunslinger Spins rewards 8 free spins in a high-risk, high-potential round. Any wild that lands on the reels activates an unlimited win multiplier, and with each nudge of a wild, the win multiplier increases by 1x without resetting. If badge symbols land on reels 1 or 5, an extra spin is awarded. If 2 badges land at the same time, the round is upgraded to Shoot Out Gunslinger Spins and the badges stay locked in position.

Hunter Spins also rewards 8 free spins, but it’s different in that it’s a less risky round and at least 1 Hunter Wild is guaranteed to land on each spin. Also here, the Shoot Out Gunslinger Spins can be triggered if 2 badges land at the same time.

Shoot Out Free Spins is where the maximum win of the game - 13,950x the stake - can be won. The feature can be triggered during the free spins rounds, as mentioned above, and also in the base game when 2 badge symbols and 3 scatters land on the same spin. If it’s triggered during the base game, players can choose between 10 Shoot Out Gunslinger Spins or 10 Shoot Out Hunter Spins.

Players who don’t want to wait to trigger the free spins round can opt to buy-in. The cost depends on the feature, and the range is between 71x and 750x the stake. While such a hefty price tag, it’s up to players to determine for themselves if it’s worthwhile. One added bonus is that the buy-in RTP increases by .10%.

Deadwood is packed with features and is highly volatile, perfect for slot players who enjoy the thrill of the Wild West. With nudging wilds, multipliers, and 3 free spins features, there is lots of fun to be had even if players don't hit the max win of 13,950x the stake. Deadwood can be played at Nolimit City casinos, online and on mobile.