Slot Review: Ever After by NextGen Gaming 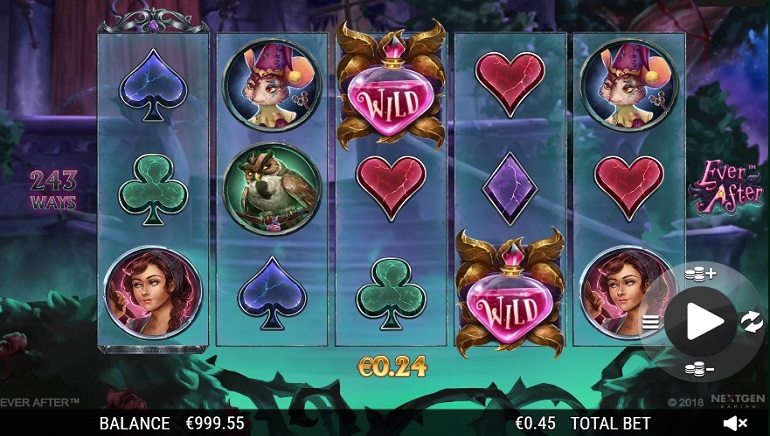 NextGen's newest slot, Ever After, is set in a besieged town that is cursed in eternal night. The fairy Faye is on a mission to help players accrue as many big wins as possible.

There’s a reason that fairy tales have been told and retold for hundreds of years - people can’t get enough of them! Which is why NextGen Gaming made a good choice for its newest slot, Ever After. Though this fairytale isn’t the light and fluffy kind you get from Disney - this one is darker and more sinister, set in a besieged town that is cursed in eternal night. The fairy Faye is on a mission to help you accrue as many big wins as possible, which can be done through the Mirror Magnificent feature and Free Spins feature. On any given spin, you can win up to 4,860x times your stake.

Reel symbols include hearts, diamonds, clubs, and spades, a wild potion bottle, a bonus scatter, and a girl, boy, owl, and mouse. The latter 4 symbols can transform into wild characters during the Mirror Magnificent feature: Princess Adva, Rakaq, Doron Dangerfield, and Bria Delmy. When transformed, their values increase significantly.

This feature is triggered randomly when the frame on the first reel turns gold. Faye then appears and “enchants” up to 3 symbols on the first reel. The wilds will become expanding and create wild reels, the bonus scatter will become an Enchanted Bonus, 2 or more of which can activate the Free Games feature, the picture symbols will transform into their fairytale counterparts, the card suits will transform into the picture symbols.

When 3 or more scatters land on the reels, you’ll get 6, 12, or 30 free spins, depending on how many scatters landed. If you land 5 scatters, you’ll win 100 times your stake. If the scatter is Enchanted, you only need 2 of them to trigger the Free Spins feature. The Mirror Magnificent feature can be triggered during the free games as well. When triggered, you can get more wilds and symbol upgrades. In total, there’s potential to win up to 4,860x your stake on every spin.

Ever After may be a dark and gloomy slot, but the playing experience is the opposite. NextGen did a great job creating an intriguing, captivating game from a classic theme. The 2 main features, Mirror Magnificent and Free Games, keep the game interesting and also create the potential for some serious payouts.

You can play Ever After at NextGen-powered casinos, online and on mobile.