Slot Review: Fire in the Hole by Nolimit City 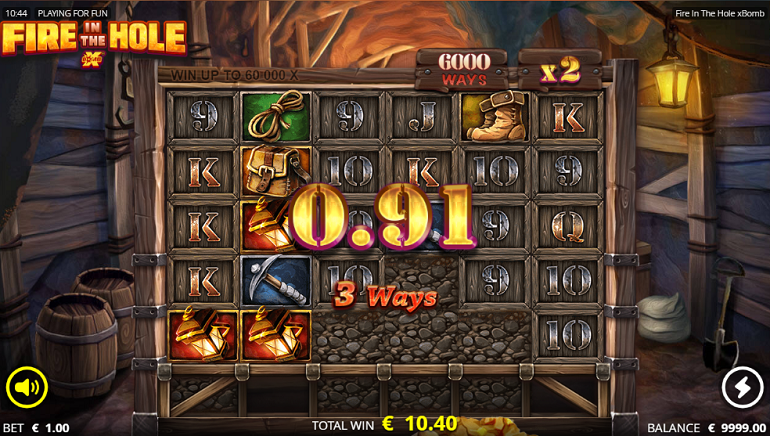 Nolimit City has delivered a doozy of a slot with Fire in the Hole, the first to include the developer’s new xBomb feature. Other features include Collapsing Mine, Wild Mining, and a free spins bonus round with several prizes and modifiers.

Nolimit City has delivered a doozy of a slot with Fire in the Hole, the first to include the developer’s new xBomb feature. In addition to exploding wilds, this slot is packed with intense underground action, including the Collapsing Mine feature, the Wild Mining feature, and a free spins bonus round with several prizes and modifiers. Fire in the Hole is highly volatile but offers a huge maximum win of 60,000x the stake. Is it worth the risk? Players can decide for themselves at Nolimit City online casinos.

Wins are scored by lining up matching symbols from left to right. Symbols include lower-paying 9-K royals and higher-paying pickaxes, rope, boots, satchels, and lanterns. There are also xBomb wilds, a new feature from Nolimit City. These act like regular wilds but also explode when a win is scored. When they explode, they blast away all adjacent regular-pay symbols and the win multiplier increases by +1.

The Collapsing Mine feature is one of the first players will encounter in this game. It’s similar to the cascading symbol mechanic employed by other developers. Here’s how it works: each spin starts with 3 active rows, but in some cases, a collapse can occur. This can happen when a winning combination is struck, when an xBomb wild explodes, or in the Wild Mining feature.

When the collapse happens, one of the rows below the grid becomes active and winning symbols are removed, making room for the other symbols to fall into the empty spaces. The maximum number of active rows is 6, and when this happens, win-ways expand to 46,656.

When 3 or more of the same symbol types line up horizontally but don’t score a win, Wild Mining is triggered. The triggering symbols are removed from the grid and up to 3 wilds are added. Other symbols on active lines explode, except for wilds and scatters, and a new collapse occurs.

Players get 3 free spins, which are reset back to 3 whenever a coin symbol lands. Also when a coin lands, players are awarded various prizes and modifiers.

Fire in the Hole is a highly volatile slot whose theme and features fit perfectly together. Nolimit City could not choose a better theme than mining to showcase its new xBomb feature, while the Collapsing Mine and Wild Mining features are fun ways to accrue wins without the bonus game.

The highlight of the slot, of course, is the Lucky Wagon Spins bonus game, which awards free spins and all kinds of fun extras. The maximum win of the game, 60,000x the stake, can be scored in both the bonus and base game, a nice touch. Fire in the Hole is available to play at Nolimit City Casinos, online and on mobile.