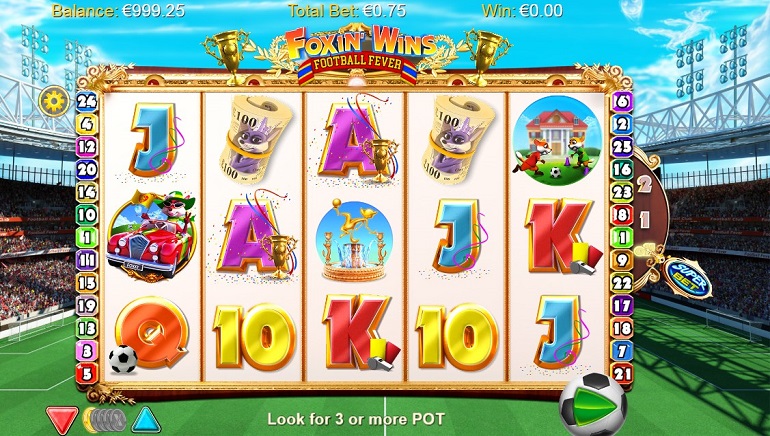 In honor of the upcoming 2018 World Cup, NextGen Gaming has developed another slot to add to its popular Foxin Wins series: Foxin Wins Football Fever. This slot is fast-paced and includes NextGen’s famous SuperBet feature, among other special features.

In honor of the upcoming 2018 World Cup, NextGen Gaming has developed another slot to add to its popular Foxin Wins series: Foxin Wins Football Fever. This slot is fast-paced and includes NextGen’s famous SuperBet feature, among other special features. In all, it’s a great combination of the world’s most popular sport and exciting, lively gameplay.

Foxin Wins Football Fever is a 5-reel, 25-payline slot that’s playable on all devices. It’s medium variance and bets range from 25p to £62.50 per spin. The backdrop of the slot is a football (aka soccer) stadium and the reel symbols include Foxin himself, wads of cash, soccer balls, trophies, jars of coins, and a few letters and numbers. While the graphics are crisp and altogether fun, the soundtrack is so fast-paced it can feel like you’re in some sort of race.

The SuperBet Feature is unique to NextGen; it’s an additional bet that you can turn on and off. When it’s off, Fox Pups will appear on reel 3 only. If you decide to turn it on, you can choose between 2 levels: Level 1 costs 10 more coins per spin and allows the Fox Pups to appear on the 3 middle reels, while Level 2 costs 50 coins per spins and the Fox Pups can appear on all reels.

Why are Fox Pups so desirable? They can turn symbols wild for bigger wins.

The Random Bonus Feature is triggered randomly and grants prizes when a Leprechaun is caught during the Leprechaun Shakedown.

But the really big deal in this game is the Free Games Feature, which is triggered by scattered pots of gold on the reels. When this happens, you’re awarded 10 free spins and get a 2x multiplier to all your wins. The feature can also be retriggered once, for up to 20 free spins in total. Bonus: There’s also a higher chance of Fox Pups appearing and creating more wilds.

Foxin Wins Football Fever is a fast-moving, enjoyable slot game that’s built on the success of NextGen’s previous Foxin slots. Ideal for fans of football and the upcoming World Cup, it can also be enjoyed by all thanks to NextGen’s appealing special features. Look for it at NextGen powered online casinos.