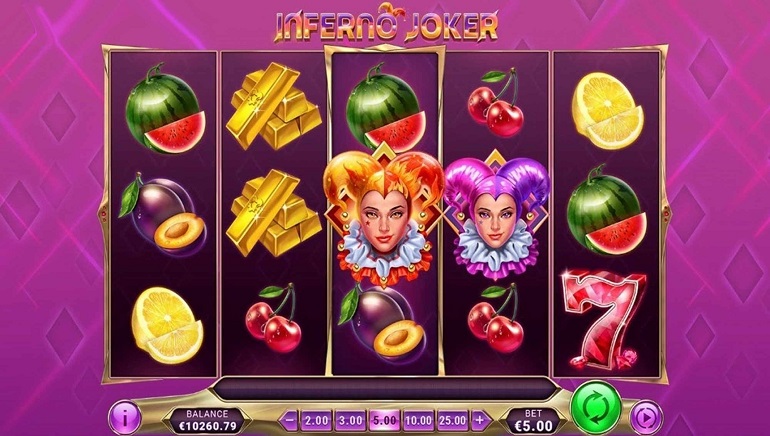 Inferno Joker is a 5-reel, 5-payline slot that features 3 symbols per reel. Bets range from $.05 to $100 a spin and it’s playable on all devices. Even though it’s a simple slot machine, it has a high variance and RTP of 96.38%.

The new Play’n GO slot, Inferno Joker, is yet another attempt at reinventing the classic fruit machine - and Play'n GO didn't reinvent that much. Players will see the characteristic fruit and lucky 7s of a classic fruit game, with the only real difference being the joker symbol, which has the potential to turn into an Inferno Joker that awards multipliers. The maximum win per spin in this game is 2500x a player’s stake.

Inferno Joker can be played online and on mobile at Play’n GO casinos.

Inferno Joker is a 5-reel, 5-payline slot that features 3 symbols per reel. Bets range from $.05 to $100 a spin and it’s playable on all devices. Even though it’s a simple slot machine, it has a high variance and RTP of 96.38%.

The slot isn’t too exciting to look at, but that’s the way it is with fruit machines. The soundtrack, at least, is fun and upbeat. Reel symbols include cherries, plums, lemons, watermelons, gold bars, lucky 7s, and a mischievous-looking joker. When 3, 4, or 5 jokers land on the reels, players win 5, 15, or 100x their stake, respectively. Since there are no wilds in this game, it’s all about the Infero Joker scatters.

When an Inferno Joker symbol lands on reel 3, the Inferno Joker Re-spins round is triggered. The third reel remains stuck in place, as do any other reels that have a joker, while the others re-spin. During the re-spin, all jokers transform into Inferno Jokers. If additional joker symbols land, they too remain stuck in position and another re-spin is played. The round ends when no new jokers land or when the reels are filled up with Inferno Jokers. Should the latter happen, players will win 2500x their stake, up to $250,000.

Don’t be fooled by Inferno Joker’s simplicity - it’s a highly volatile slot, which means that players need to have patience if they want to see big wins. For players who prefer a little more excitement in their slots, Inferno Joker probably won’t quench their thirst. For fans of fruit machines, Inferno Joker is a solid combination of retro and modern.