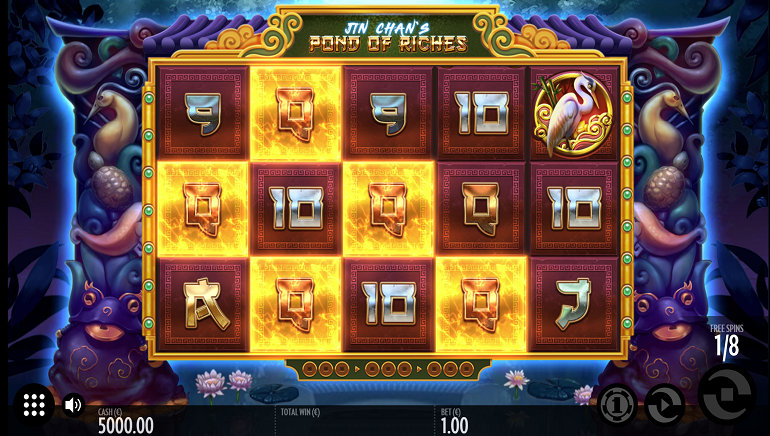 Jin Chan’s Pond of Riches from Thunderkick has multiplier wilds, free spins, respins, and a potential maximum win of 10,000x the stake. But is the RTP so low that players won't be willing to even try?

Jin Chan’s Pond of Riches is a new Asian-themed slot from Thunderkick that comes with multiplier wilds, free spins, and respins. In Chinese, Jin chan means “money toad,” and it refers to the famous frog statue with 3 legs and a coin in its mouth. The statue represents prosperity and riches, and the reels of this slot are adorned with them. The soundtrack is so mellow that it’s hard to believe it belies a massive potential win of 10,000x the stake. But while the stakes are high, the RTP is low. Will players try their luck anyway?

Jin Chan’s Pond of Riches is a 5-reel, 15-payline slot that’s playable on all devices. Bets range from $.10 to $100 per spin and the game is highly volatile. Ironically, the slot with a name that refers to prosperity has an RTP of only 94.27%, which may be a sore point for some players.

Symbols include lower-paying 9-A royals and higher-paying herons, koi, turtles, and frogs. The latter pays out 50x the stake when 5 land in a row. There is also a wild symbol and scatter. The wild substitutes for all other symbols and also activates multipliers when it’s part of a winning combo. Multipliers can get as high as 120x.

The Sticky Respin feature is triggered on every free spin that results in a win. During the respin, winning symbols are locked in place and other positions respin for a chance at boosting the win. Wins scored on a respin trigger more respins.

Jin Chan’s Pond of Riches presents a unique take on Asian-themed slots. Its graphics and soundtrack are spot-on and its features come with lots of potential rewards. The main problem players might have with this game is the high volatility and low RTP. Will that be enough to deter them from trying it out? Only time will tell if Thunderkick has struck gold with its new math model or flopped miserably. Players can test the game for themselves at Thunderkick online casinos.