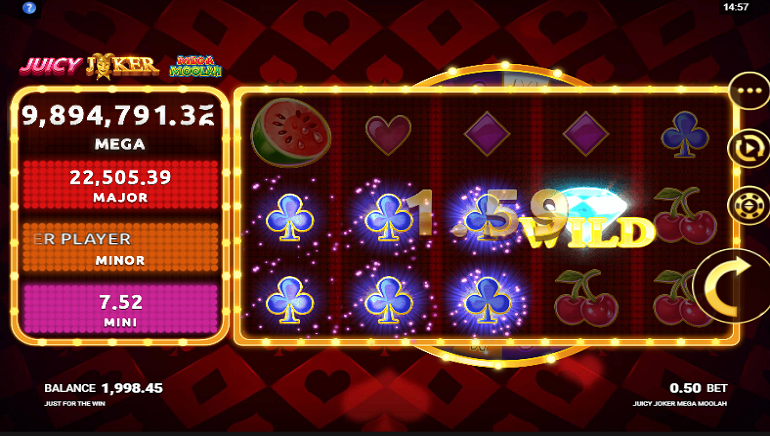 Juicy Joker Mega Moolah from Microgaming partner Just For The Win is the latest installment in the widely popular Mega Moolah franchise. It features respins, free spins, and a Jackpot Wheel with 4 different progressive jackpots.

Juicy Joker Mega Moolah from Microgaming partner Just For The Win is the latest installment in the wildly popular Mega Moolah franchise. The original, released by Microgaming in 2006, remains one of the most popular progressive jackpots of all time, so let’s see how this new version from JFTW compares.

Juicy Joker Mega Moolah gets its name from the classic fruit symbols that appear on the reels and the joker symbols that launch the jackpot round. Triggering the Jackpot Wheel will give players a chance to win 1 of 4 progressive jackpots, which climb higher every time any player, anywhere in the world spins the reels.

Juicy Joker Mega Moolah is available at Microgaming and JFTW casinos, online and on mobile.

There are also 3 wilds: normal, Respin, and Juicy. The latter is used only in the Free Spins round. All wilds replace symbols to create winning combinations and pay out 25x the bet when 5 land in combination.

When 3 scatter symbols land on the reels, the Free Spins round is triggered. In this round, the Returning Wild feature is in play, but the wild used here is called the Juicy Wild. Like the Respin Wild, when a Juicy Wild lands, its position is marked by a frame.